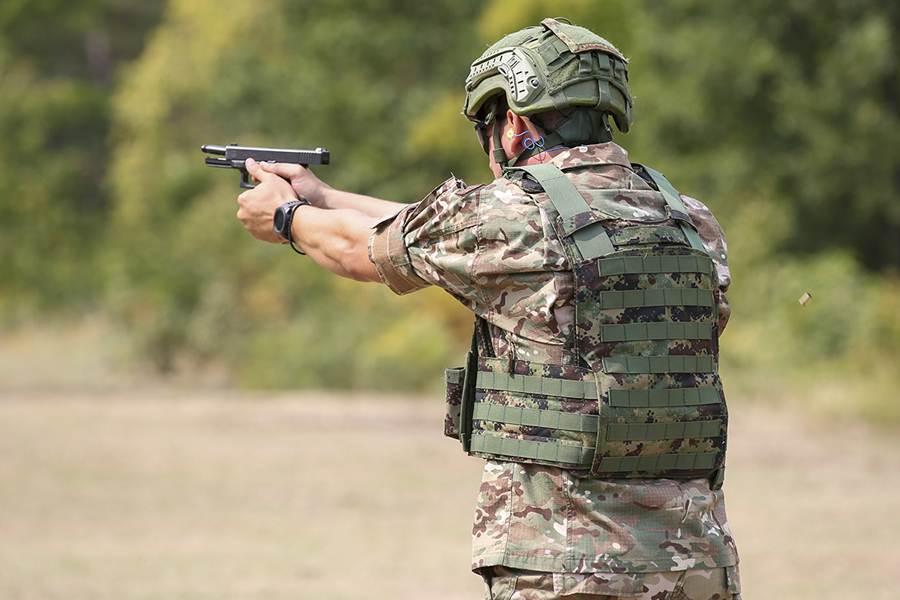 Military Policemen from Qatar and Cyprus have performed the first shooting exercises of the ‘Guardians of Order’ competition in Serbia.

Press Release, Moscow, 24 August 2021: [auto-translated] The first training sessions at the Zicha shooting range in Serbia were held today for the Cyprus and Qatar participants of the ‘Guardians of Order’ ARMI-2021 competition. The Military Police of the two countries were familiarized with the rules of the “Fire” stage, told about the intricacies of shooting exercises from the Glock 17 pistol and Zastava M70 assault rifles, and also explained why the referees would award penalty points during the competition.

For the first time, Cypriot and Qatari military personnel are participating in an international Military Police competition. As the representatives of the teams shared, everything here in Serbia is different from what they are used to dealing with: the training grounds, and the weapons used, and the training methods, and even the climate. Nevertheless, the teams are set for fair competition and are ready to give their best 100 percent.

“This is our first time here, it’s true. But we will take this chance, no matter what,” said the representative of the Cypriot team at the ‘Guardians of Order’ competition ARMI-2021 Novidos Papamaykl. “So far, I’ve only seen the site of the fourth stage. ‘Good Track’. It differs from what we have, but nonetheless. The difference is also that the weapon is different here. We have other pistols and machine guns, but we will try to master them. “

Classes at all competition sites are conducted by Serbian military instructors. Before training in performing tasks included in the competitive programme, each team undergoes mandatory instructions on safety measures and rules of conduct at the training ground, after which it proceeds to the stage-by-stage development of all standards.

According to the rules of the ‘Fire’ stage of the ‘Guardians of Order’ competition, teams nominate three participants to the stage. Each of them must hit five chest targets from a Glock 17 pistol and five standing targets from a Zastava M70 assault rifle. Chest targets are located 10 metres from the firing line, and standing targets are 100 metres from the firing point. At the same time, shields with a translucent coating are placed on the head, a hit on which entails the accrual of penalty seconds. To avoid this, the competitor must move several times along the line of fire, first with a pistol and then with a sub-machine gun. The weapon must be directed strictly towards the targets. Each target must be shot at least twice. The fire from the machine gun must be carried out in bursts, and not in single shots. The less time a participant spends on shooting from the moment the command “Palba!” (“Fire!” in Serb) sounds, the better the result.

The ‘Fire’ stage of the ‘Guardians of Order’ ARMI-2021 competition in Serbian Kralevo will be held on August 30. The final of the Military Police competition is scheduled for September 3.

For reference: ARMI-2021 , the International Army Games 2021, will be held from August 22 to September 4, 2021 on the territory of 11 states (Russia, Algeria, Armenia, Belarus, China, Iran, Kazakhstan, Qatar, Serbia, Uzbekistan and Vietnam). In total, more than five thousand servicemen, consisting of 277 teams from 42 countries, take part in 34 competitions of ARMI-2021. Representatives of the armed forces of Cyprus, Iran, Kazakhstan, Russia, Serbia, and Qatar and take part in the competition ‘Guardians of Order’.