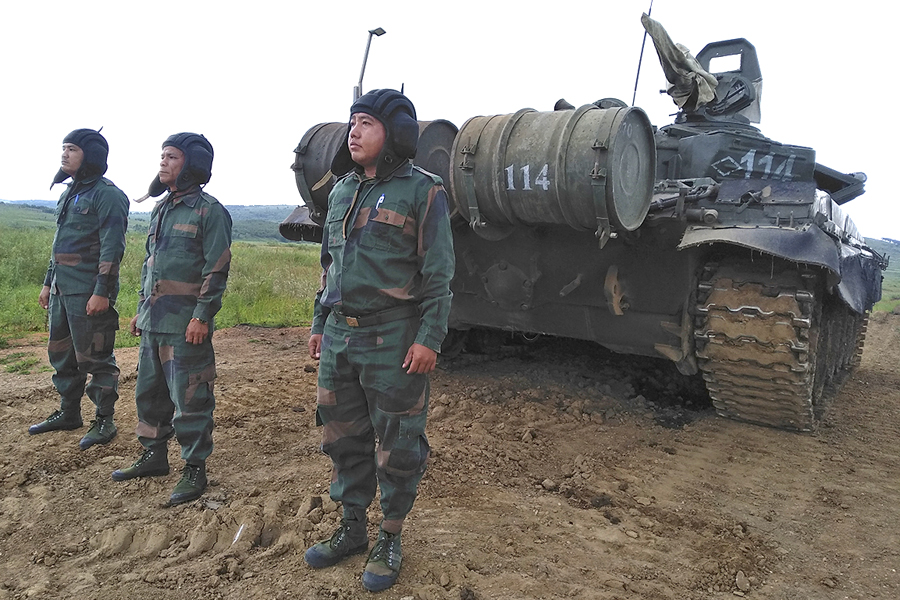 Russian Federation News Release, August 2021: [auto-translated] During the joint Russian-Lao military exercise LAROS-2021, held in the Primorsky Region at the Sergeevsky training ground, the tankers of the Eastern Military District (ВВО / VVO) shared with their Lao counterparts their experience of modern manoeuvrable combat using unmanned aircraft. In particular, live firing was carried out, during which Lao tankers were trained to destroy the enemy with the help of a reconnaissance fire complex.

Control firing was carried out in the form of an offensive training battle. Each tank platoon gradually hit targets imitating heavy armoured vehicles, anti-tank crews and grenade launchers. After completing the firing, the tankers set up a smokescreen and made a covert evasion from a retaliatory strike. During the training offensive operations, aerial reconnaissance of targets and fire adjustment were organised using the Eleron-3SV unmanned aerial vehicle. The leadership of the Lao side was also shown the methodology for organising training in firepower and other basic subjects of combat training.

The joint Russian-Laotian exercise LAROS-2021 was held for the first time on the territory of Russia. The first joint exercise was held in 2019 in Laos. The Russian side was represented by tank subunits of the combined arms army of the Air Defence Forces stationed in the Primorsky Territory. Servicemen practised joint actions to combat illegal armed groups. In total, about 500 military personnel took part in the exercise, about 100 units of military equipment were involved, including Su-25 attack aircraft and Ka-52 air defence attack helicopters. The exercise started on August 11 and lasted until the 19th.

Editor’s Footnote: For camouflage aficionados ~ the Laotian troops are wearing the recent M2018 three-colour camouflage pattern issued primarily to Lao People’s Army armoured formation crews; note that the fabric of their jungle boots is also in this pattern.