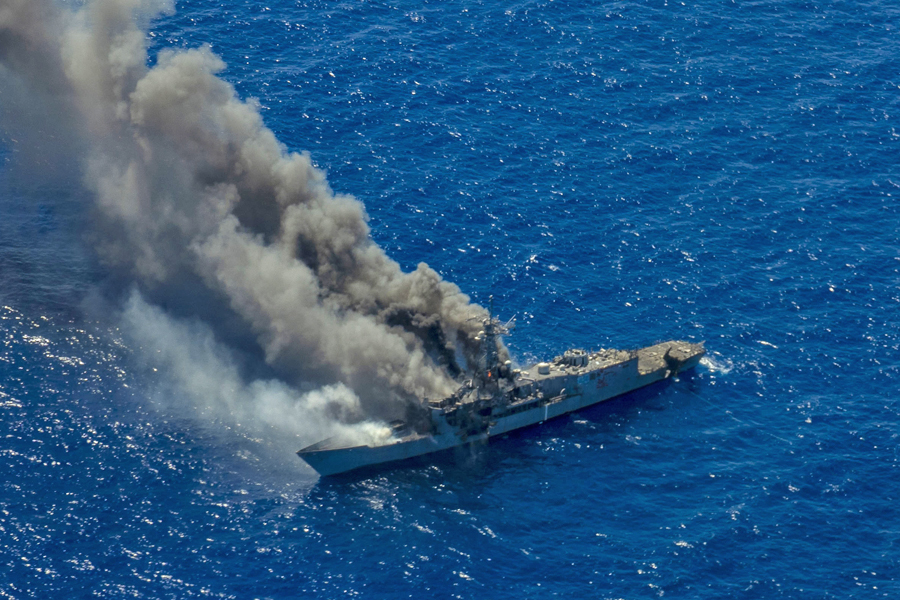 “Lethal combat power was effectively applied to a variety of maritime threats over the last two weeks in a simulated environment as part of the Navy’s Large Scale Exercise and expertly demonstrated Sunday with live ordnance,” said US 3rd Fleet Commander Vice Adm. Steve Koehler. “The precise and coordinated strikes from the Navy and our Joint teammates resulted in the rapid destruction and sinking of the target ship and exemplify our ability to decisively apply force in the maritime battlespace.”

Former Navy vessels used in sinking exercises, referred to as hulks, are prepared in strict compliance with regulations prescribed and enforced by the Environmental Protection Agency under a general permit the Navy holds pursuant to the Marine Protection, Research and Sanctuaries Act. Each exercise is required to sink the hulk in at least 1,000 fathoms (6,000 feet) of water and at least 50 nautical miles from land and surveys are conducted to safeguard against harm to people or marine mammals during the event. Prior to being transported for participation in a sinking exercise, each vessel is put through a rigorous cleaning process for environmental safety and is inspected to ensure the ship meets EPA requirements.

Ex-Ingraham was a guided missile frigate commissioned on Aug. 5, 1989, and was decommissioned on Jan. 30, 2015. The ship was named for Duncan Nathaniel Ingraham and is the fourth Navy ship with the namesake. It is the second of its name to be used in a sinking exercise; ex-USS Ingraham (DD 694), which was decommissioned in 1971 and sold to the Greek Navy, was sunk in 2001.

As an integral part of US Pacific Fleet, US 3rd Fleet operates naval forces in the Indo-Pacific in addition to providing realistic and relevant training necessary to execute our Navy’s timeless roles of sea control and power projection. US 3rd Fleet works in close coordination with other numbered Fleets to provide commanders with capable, ready forces to deploy forward and win in day-to-day competition, in crisis, and in conflict.