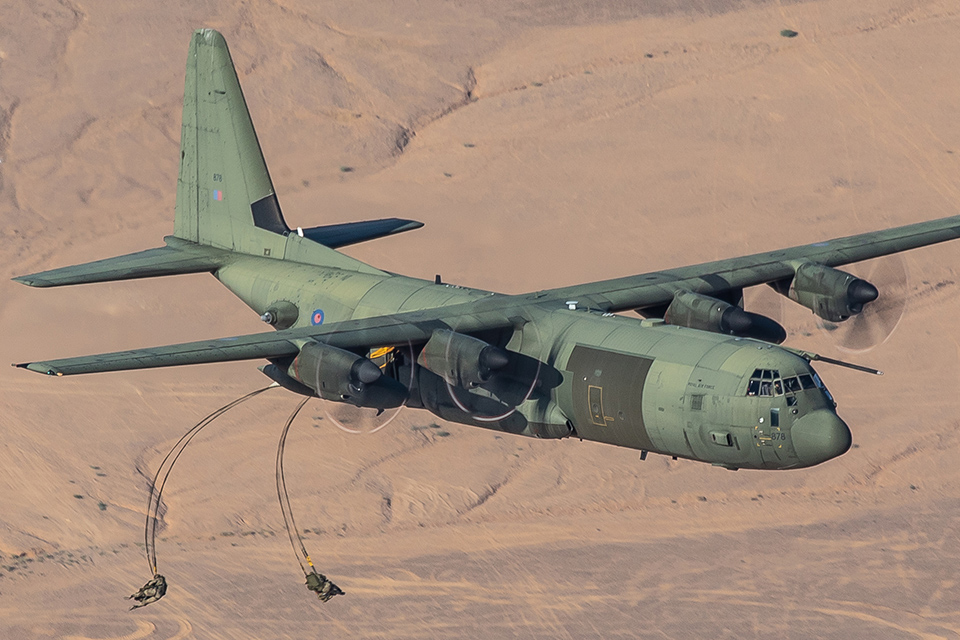 British Army Paratroopers from 2 PARA have airdropped into Jordan as part of a Joint Theatre Entry (JTE) parachuting exercise.

More than 150 personnel from 16 Air Assault Brigade conducted the low altitude insert from C-130 Hercules aircraft which took off from Cyprus. The Brigade, based in Colchester, is the most deployable and ready formation in the British Army, standing as a core component of the UK’s Global Response Force. Once in Jordan, British troops joined a tactical exercise with elite paratroopers from the Jordanian Special Forces Group.

The exercise coincides with the CSG as it transitions from the Mediterranean to the Indian Ocean. Both deployments showcase the capability and professionalism of the UK Armed Forces and their ability to be more agile and competitive against changing global threats. CSG’s world-class air and maritime support will maximise potential of 16 Air Assault Brigade, part of the British Army’s ‘Future Soldier’ concept, whereby UK Armed Forces will be more integrated, more expeditionary, and ready for future challenges.

Minister for the Armed Forces, James Heappey said: “The UK Armed Forces stand with Jordan against shared threats in the region.

“The joint exercise is a showcase of the Global Response Force’s impressive ability to operate across multiple domains and in harsh environments. They are the soldiers of the future, ready to tackle changing threats around the world.”

Jordan is a key partner for the UK in the region. The joint exercise demonstrates the UK’s commitment Jordan and to regional stability, with the exercise taking place in Jordan’s centenary yea In the lead up to the exercise a number of mission rehearsals also took place in Cyprus, where UK Defence has bases which maintain a permanent military presence in the Eastern Mediterranean, helping to support regional security.

“We are trained specifically in the techniques of air manoeuvre. It is a demanding role and the Brigade places a premium on being expeditionary and integrated with the other domains – critical for the Army’s Future Soldier concept.”

“The UK has strong, historic bilateral ties in the Middle East and North Africa region, which are vital to UK prosperity and security. The UK Armed Forces will play a role as we look to deepen these links. The Pathfinders, trained in specialist airborne insertion techniques and capable of conducting offensive action tasks at very short notice, are the advance force for 16 Brigade and also played a part in the exercise. Their key role was identifying drop zones and landing zones where the main body of troops parachuted in.”