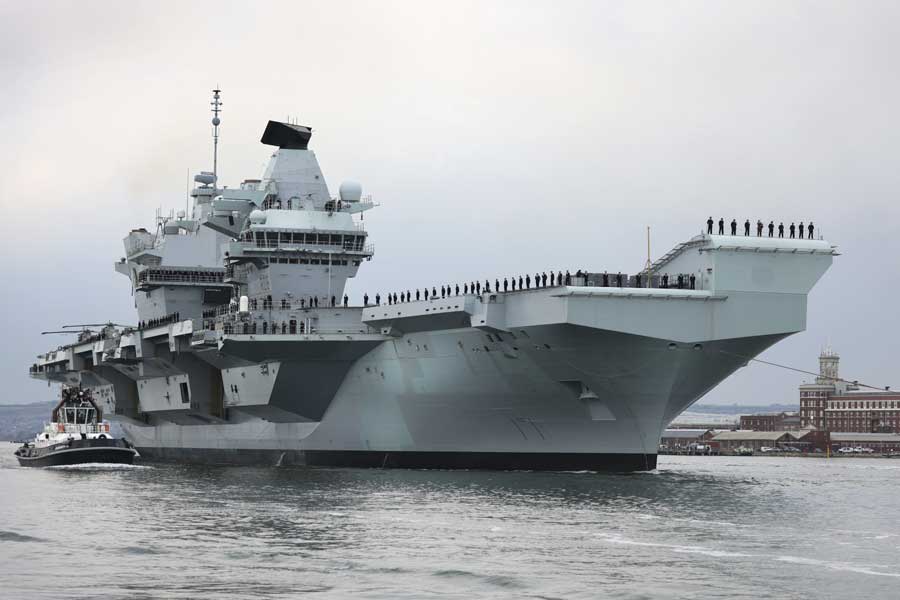 HMS Queen Elizabeth has set sail from Portsmouth as the UK Carrier Strike Group prepares to join Allied forces for its largest and most demanding exercise to date [Crown Copyright: PO Dave Jenkins]

HMS Queen Elizabeth has set sail from Portsmouth on Exercise STRIKE WARRIOR as the UK Carrier Strike Group prepares ahead of global deployment.

Royal Navy News Release, 01 May 2021: Aircraft carrier HMS Queen Elizabeth has set sail from Portsmouth as the UK Carrier Strike Group prepares to join Allied forces for its largest and most demanding exercise to date.

Exercise STRIKE WARRIOR will involve more than 20 warships, three submarines and 150 aircraft from 11 nations and is a final test for the Carrier Strike Group ahead of its first operational deployment to the Mediterranean, Indian Ocean and Asia Pacific. The exercise, which will run for two weeks, will see the task group pitted against warships from NATO’s Standing Maritime Group 1 in waters off north-west Scotland to prove it is capable of undertaking high intensity operations against the most demanding adversaries. The culmination of STRIKE WARRIOR will see the Carrier Strike Group certified ready for deployment, at which point operational command will pass from the Royal Navy’s Fleet Commander, Vice Admiral Jerry Kyd, to the Chief of Joint Operations, Vice Admiral Sir Ben Key.

“It is therefore fitting that our final and most demanding test prior to deployment involves so many of Britain’s allies.

“As the ships and aircraft of the Carrier Strike Group assemble over the coming days, Exercise STRIKE WARRIOR is an opportunity prove to ourselves, and to the world, that we have what it takes to act as cohesive and potent fighting force at sea, under the water, in the air and over the land.”

In the next few days HMS Queen Elizabeth will once again embark 5th Generation fighters, comprising of 18 F-35 Lightning jets drawn from the UK’s 617 Squadron, the Dambusters, and VMFA-211 of the US Marine Corps, better known as the Wake Island Avengers. The Carrier Air Wing also includes the largest concentration of helicopters in a Royal Navy task group in a decade, with three Merlin Mk4 from 845 Naval Air Squadron, four Wildcat from 815 Naval Air Squadron and seven Merlin Mk2 from 820 Naval Air Squadron.

HMS Queen Elizabeth will be accompanied by destroyers HMS Diamond and HMS Defender, frigates HMS Richmond and HMS Kent and US Navy destroyer USS The Sullivans, which will form a ring of steel around the 65,000-tonne carrier. Meanwhile, Royal Fleet Auxiliary ships Fort Victoria and Tidespring will keep the Strike Group supplied with fuel, food, stores and ammunition.

“Having spent two busy years bringing the Royal Navy’s new diesel propulsion and controls system into service, HMS Richmond is one of the most up-to-date anti-submarine frigates in the fleet. Our proven weapons and sensors, operated by a team of highly skilled men and women, represent a potent defence against underwater threats.

“But we are also looking forward to working with the Royal Navy’s friends and allies to help strengthen Britain’s international partnerships as part of this historic deployment.”

STRIKE WARRIOR is the third and last in a series of pre-deployment exercises undertaken by the Carrier Strike Group over the past year, each more demanding and complex than the last.

It takes place concurrently with NATO’s largest biannual maritime exercise, Joint WARRIOR , predominantly in the north west of Scotland, which sees the Royal Navy, Royal Air Force and British Army joined by forces from NATO and Australia for a series of realistic operational scenarios spanning sea, air, land and cyber and space.

Colonel Simon Doran USMC, the US Senior Representative to the UK Carrier Strike Group, said: “STRIKE WARRIOR represents the final opportunity for the US Marines, sailors and coast guardsmen to refine years of planning and training.

“We will validate our synergy with the Royal Navy, Royal Air Force and other NATO allies. Through this interoperability, we will demonstrate the carrier power projection capabilities of the UK Carrier Strike Group.”

Sqn Ldr Stew Campbell RAF of 617 Squadron added: “617 Squadron are delighted to be back onboard HMS Queen Elizabeth alongside our US Marine Corps counterparts.

“Exercise STRIKE WARRIOR will put the finishing touches on the robust work up package already completed, assuring our readiness to deploy as the centrepiece of a hugely capable and diverse Carrier Strike Group.”