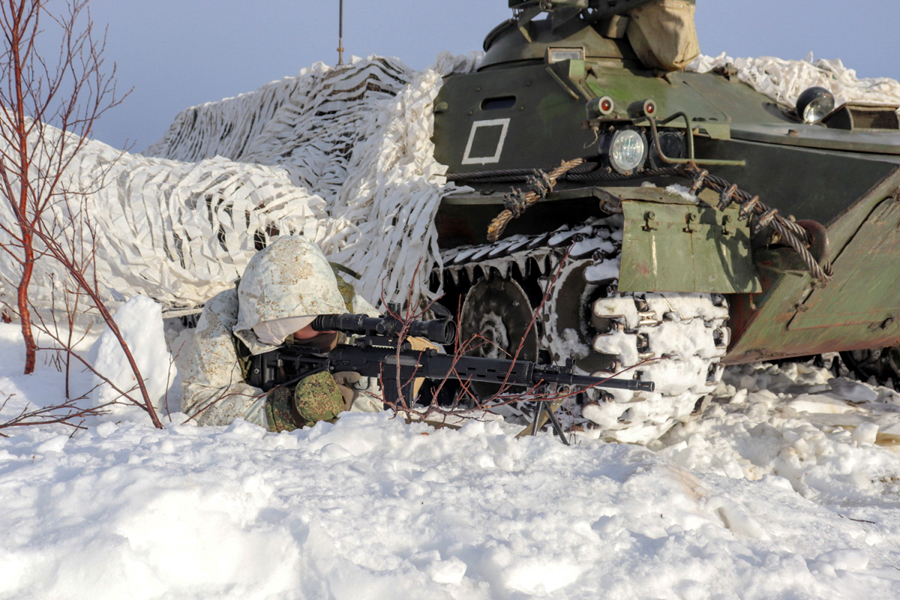 Motorised riflemen of the Russian Northern Fleet have conducted a battalion tactical exercise with live firing in the Arctic.

Russian MoD Press Release, 29 March 2021: [auto-translated] At a military training ground in the Pechenga district of the Murmansk region, a battalion tactical exercise on manoeuvre defence in the Far North and the Arctic was held by units of an independent motorised rifle brigade of the Northern Fleet Army Corps.

During the tactical exercise, temporary standards were worked out for bringing motorised rifle units to the highest degree of combat readiness and marching to designated areas. During the march, the motorised rifle units practised actions to repel an enemy attack, and also overcame notionally infected areas of the terrain. At the given lines, the tasks of engineering training were completed: the construction of temporary defensive structures for military equipment and their camouflage.

When conducting live fire from all types of weapons, servicemen of various units worked out the coherence of their actions according to a single plan, successfully hitting targets imitating armoured vehicles and aviation, as well as the manpower of a notional enemy. Firing from small arms, mortars and grenade launchers, guns and combat vehicles was carried out at distances from 100 metres to 15 kilometres.

The battalion tactical exercise was conducted under the leadership of the commander of an independent motorised rifle brigade of the Northern Fleet, Colonel Denis Kurilo. According to him, special attention during the exercise was paid to working out the interaction of motorised rifle, artillery and tank units in defensive operations, camouflage and reconnaissance of the area. The servicemen have worked out the standards for fire, tactical, engineering and special training. The ability of unit commanders to tactically competently conduct a modern battle in Arctic conditions was assessed.