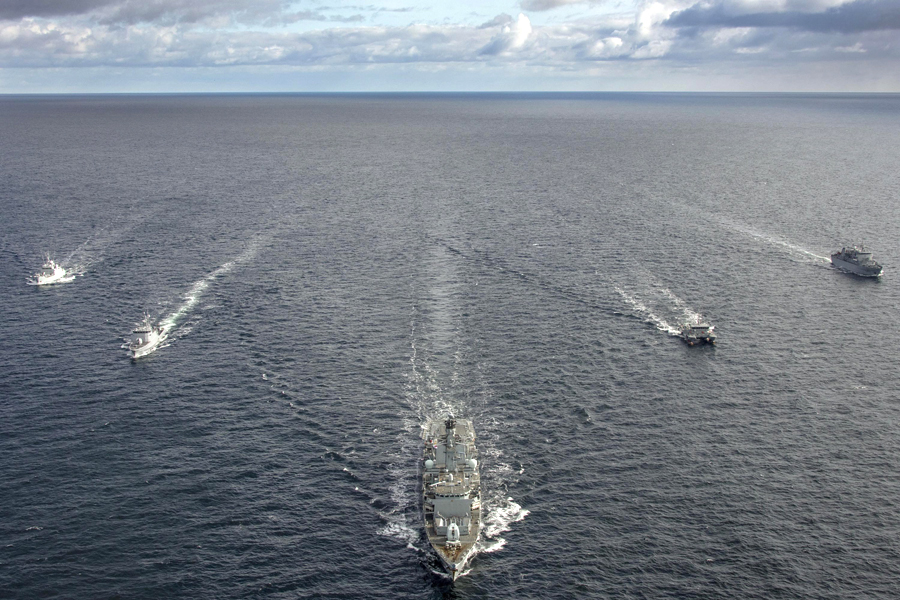 A UK-led international naval operation involving the Royal Navy and the Estonian, Latvian and Lithuanian Navies is taking place on the Baltic Sea.

Estonian Press Release, Tallinn, 12 March 2021: The UK-led Joint Expeditionary Force is conducting a joint naval operation on southern part of the Baltic Sea from March 10 to 14. Additionally to the Royal Navy, Estonian, Latvian and Lithuanian navies take part of the operation.

“Security and defence of the waterways are our priorities during times of crises,” says Maj. Gen. Indrek Sirel, Deputy Chief of Defence of the Estonian Defence Forces. “The majority of our allies’ military equipment and other goods is transported by the sea. This exercise strengthens deterrence at sea in the same way as NATO Enhanced Forward Presence strengthens deterrence on the land.”

“Some of the UK’s closest and most steadfast Allies are found in the Baltics. This deployment is both the latest example of a long and proud history of defence cooperation and a clear demonstration of the capability of the UK-led Joint Expeditionary Force (JEF),” said Ben Wallace, UK-s Defence Secretary. “As the first maritime patrol of made up of exclusively JEF nations, we are ensuring our ships and people are ready to operate in challenging conditions alongside our Estonian, Latvian, Lithuanian and Swedish Allies.”

JEF is determined to maintain the security and to react rapidly to crises in the northern Europe, Baltic States, northern Atlantic or anywhere in the world. JEF complements its member states’ and NATO´s deterrence posture in the region – planning, training and operating together enables member nations to react rapidly to any hostile activities and to prevent early the escalation of possible crises.

Royal Navy Press Release, 12 March 2021: The Royal Navy is leading an international task group of half a dozen warships on a security patrol of the Baltic.

Frigates HMS Lancaster and Westminster, tanker RFA Tiderace and vessels from all three Baltic states – Latvia, Lithuania and Estonia – have joined forces for a concerted demonstration of Britain’s commitment to the security and stability of the region. The deployment is another test of elements of the UK-led Joint Expeditionary Force – a partnership of nine northern European nations committed to working together on operations as varied as warfighting through to humanitarian assistance and defence engagement.

“Some of the UK’s closest and most steadfast Allies are found in the Baltics. This deployment is both the latest example of a long and proud history of defence cooperation and a clear demonstration of the capability of the UK-led Joint Expeditionary Force,” said Defence Secretary Ben Wallace.

“As the first maritime patrol of made up of exclusively JEF nations, we are ensuring our ships and people are ready to operate in challenging conditions alongside our Estonian, Latvian, Lithuanian and Swedish allies.”

The Royal Navy ships have been joined by Estonian minelayer Wambola, Latvian patrol vessel Jelgava, and from Lithuania minelayer Jotvingis and patrol ship Selis, plus aircraft from the Swedish Air Force, with the focus on maritime security and freedom of navigation in the Baltic.

“It is a real privilege to command the first task group of this type and I have been impressed by the capabilities on display from our partner nations,” said Commander Will Blackett, Commanding Officer of Portsmouth-based Lancaster which is flagship of the naval force.

“My ship’s company are continuing to deliver success on operations against the hugely challenging backdrop of the Coronavirus pandemic.”

His ships conducted a series of combined manoeuvres to test collective seamanship and get used to working together as a united task group, all played out in unrelenting sub-zero temperatures. “It is hugely exciting to be working with allied navies on live operations and a real privilege for me to experience,” said HMS Lancaster warfare specialist Able Seaman James Hearn.

Lancaster’s Wildcat helicopter is flying patrols by day and night, in particular making use of its cutting-edge thermal imaging camera to refine identifying shipping in the Baltic, as well as practising secondary duties such as search and rescue and winching. The weather in the Baltic in March – glorious sunshine one minute and a few hours later the aircraft is flying through snow squalls – places demands on the aircrew as well as the engineers maintaining the helicopter. “The mission has proven the operational utility of the Wildcat aircraft in a cold Baltic Sea environment,” said Petty Officer (Air Engineering Technician) David Shears.

The British ships underwent a week of ‘full-throttle’ individual and combined training in the North Sea on their way to join their Baltic allies. The workout has covered firefighting, medical training, damage control, ships sailing in close formation, refuelling at sea, gunnery, air defence, and intensive training with helicopters – plus adjusting to sub-zero temperatures and snowstorms as the ships pushed deeper into the Baltic.

Some of Lancaster’s 200 crew are relatively fresh out of training, such as marine engineer Gareth MacGilvray, experienced his first deployment as he grapples with maintaining hi-tech machinery at sea. “Training on a live warship is a lot harder than during basic training and there is little room for error so you definitely need to be on your ‘A’ game the whole time!” he said. “It was a hard week but I’m proud of what I achieved.”