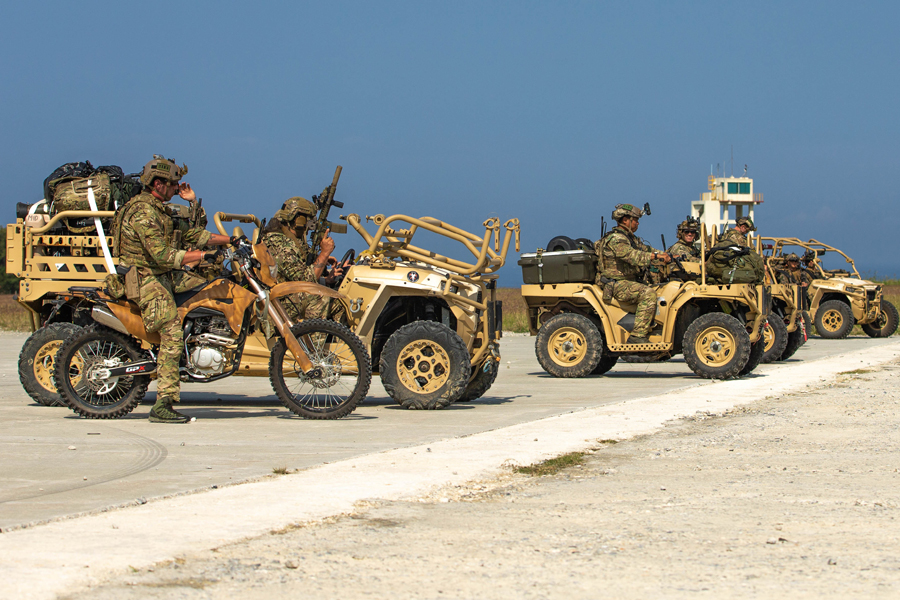 US Recon Marines and Army Special Forces integrated with the joint force to seize and defend key maritime terrain across the Pacific.

News Article, Okinawa, 18 March 2021: US Marine Corps exercises have, historically, featured hundreds of Marines storming ashore under cover of aircraft, with Navy ships looming ominously on the horizon, and the roar of gunfire, smoke and shouted commands permeating every aspect of a forced landing en masse. By contrast, the most recent operations led by 3d Marine Division looked and sounded like nothing – then the shooting began.

During March 2021, US Marines in Japan and Hawaii teamed up with joint partners to execute networked Expeditionary Advanced Base Operations (EABO) spanning five separate islands in a complex display of modern littoral warfare. Exercises CASTAWAY 21.1 in Japan and SPARTAN FURY 21.1 in Hawaii demonstrated the ability of the Marine Corps to integrate with the joint force to seize and defend key maritime terrain, provide low-signature sustainment, and execute long-range precision fires in support of naval operations from expeditionary advanced bases.

“These operations can be replicated on any island in the Indo-Pacific, and working with our joint partners allows us to refine the tactics, techniques, and procedures to do this in a real-world situation,” said Lt. Col. Roe Lemons, commanding officer of 3d Battalion, 12th Marines, whose forces were responsible for planning and executing much of CASTAWAY 21.1 in Japan. “We are coming in with stealth, extending the reach of our long-range fires, and working on our ability to sustain that as long as the maritime force needs us to control an access point to the sea lines of communication.”

Before the introduction of persistent long-range fires capabilities at the EAB on Ie Shima, Marines with 3d Reconnaissance Battalion and members of the Army Special Forces and Air Force Special Operations combined to execute a stealthy insertion through a daring series of multi-mode infiltrations into the island via the air and sea. A military freefall infiltration from an MV-22B Osprey, coupled with an amphibious infiltration under the cover of darkness, enabled the Marines and their joint counterparts to thoroughly survey the area for enemy forces and ensure the suitability of the airfield. Several F-35Bs from Marine Fighter Attack Squadron 121 soon joined the battle. Not long after, numerous MV-22B Ospreys and CH-53E Super Stallions with 1st Marine Aircraft Wing delivered hundreds of infantrymen with 3d Battalion, 8th Marines who secured the island, established formidable defences, and paved the way for an enduring EAB with responsive long-range fires.

With hidden firing points dotting islands and a web of fleeting, stealthy connections facilitating a common operational picture across multiple domains, Marines charged ahead into mastering new ways to enable freedom of manoeuvre for the US Navy and allied forces. Although dispersed, they were not alone. Leading these complex joint operations, 12th Marine Regiment was supported by a host of capabilities within III Marine Expeditionary Force and across the joint force to include the Navy’s USS Halsey (DDG 97); Air Force C-17 Globemaster III transports and combat controllers; the Army’s I Corps Multi-Domain Task Force, 25th Infantry Division, 1st Air Defense Artillery Regiment, 8th Theater Sustainment Command, and 1st Special Forces Group (Airborne); and the Space Force.

“We recognise that our operating environment is changing … the biggest difference is that we will need to address problems and opportunities with a joint approach,” said Col. Michael Roach, commanding officer of 12th Marines. “In this exercise, rather this competition operation, you saw a networked and distributed force executing concepts that would be critical to support any future distributed maritime operation.”

New approaches to the employment and sustainment of these distributed forces were tested with Marines spread across hundreds of miles of islands and ocean, working closely with Air Force and Navy counterparts to achieve outsize effects and remain undetectable. While naval integration with the Marine Corps is often viewed in terms of amphibious shipping, this operation featured Marines working directly with a US Navy Destroyer.

“We are using the ship’s sensors to extend our range and share information across the island chain,” said Lt. Cmdr. Jacob Zercher, naval gunfire liaison officer with 1st Battalion, 12th Marines. “We are able to broaden what we can see and shoot, as well create a better shared awareness of the battlespace.”

Numerous exercises in the past have featured what is known as a HIMARS rapid infiltration, or HIRAIN, during which a launcher is quickly brought to an airfield, fires, and leaves. However, the realistic expeditionary sustainment of an enduring long-range fires capabilities on EABs was a key focus during these latest operations with the utilization of mobile surface vessels, aerial delivery facilitated by both Marine Corps and joint assets, and low-signature ground convoys emplacing concealed supply caches throughout the area of operations by 1st Transportation Support Battalion.

“We are validating what we need to remain in a place like this for an enduring period of time,” said Maj. Jacob Burton, commander of a HIMARS battery with 3/12 operating on Ie Shima during CASTAWAY 21.1. “We are getting a lot out of this operation.”

Concurrently, infantrymen with 3d Battalion, 3d Marines employed a wide-ranging coastal defence around Okinawa, using highly mobile forces both on land and in quick, low-profile boats to locate and strike targets at sea. The Joint Light Tactical Vehicle, already used by Marines with 3d Marine Division to coordinate distributed air assaults during Forest Light in 2020, took on a new role by allowing a small group of missile-armed Marines to detect and strike targets on the move.

“Nothing is off-limits when it comes to learning and innovating,” said Capt. Jonathan Kohler, a company commander with 3/3 who led the littoral defence operations.

Many aspects of EABO are nothing new to the Marines of 3d Marine Division. This storied unit has a long tradition of innovation, development, and building interoperability with both the joint force and US allies in the Indo-Pacific region. During 2020 alone, lessons learned from notable exercises such as Forest Light and Keen Sword, which featured US and Japanese troops seizing and defending islands and establishing EABs, were on the minds of many of the Marines along with the realization that a future fight against a peer adversary would be a joint endeavour.

“CASTAWAY was an important step toward enhancing joint interoperability to ensure lethal, ready, and responsive forces for crises and contingencies with our partners throughout the Indo-Pacific region,” said US Army Lt. Col. Erik Davis, commanding officer of 1st Battalion, 1st SFG (A). “This event illustrated how Special Operations Forces capabilities can support the rapid deployment of 3d Marine Division’s long-range precision fires platforms into austere or remote locations.”

Facilitating this joint integration is a natural fit for the Marine Corps because the timeless traits of adaptability and teamwork are cultivated beginning with entry-level training, according to Roach. “I see our service as being the linchpin to bringing a successful joint operation together … like we showed this week in Okinawa and Hawaii.”