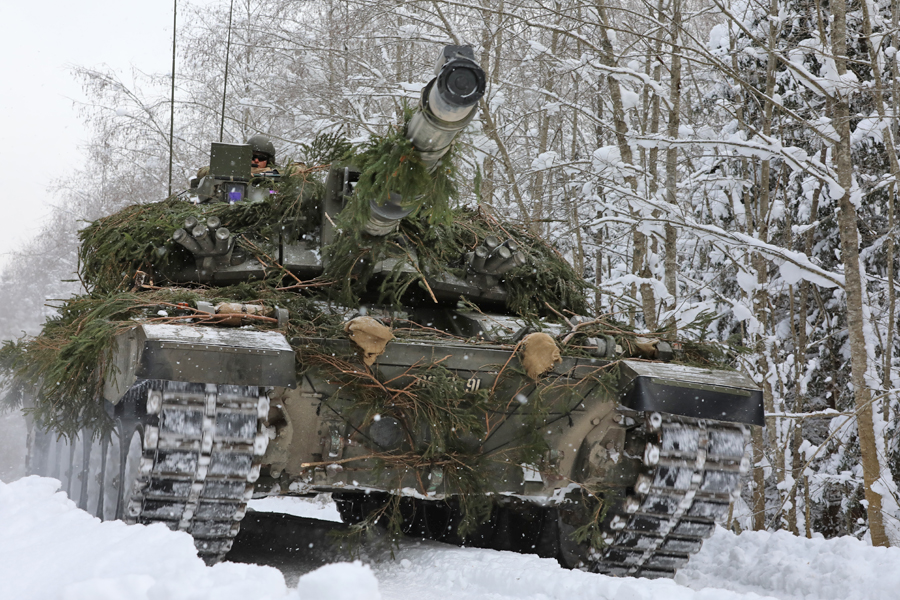 Press Release, Tallinn, 09 February 2021: [auto-translated] More than 600 members of the [Estonian] Defence Forces Scout Battalion, the Allied Battlegroup, the Intelligence Company and the [Estonian] Air Force have been testing the WINTER CAMP at the Defence Forces’ Central Polygon (Training Area) since Sunday and testing the winter warfare skills of the battalion’s units.

“The Scout Battalion is a battle-ready unit regardless of the season and time of day, so it is very important to consolidate and improve the skills of our fighters to operate in the most difficult conditions this week kindly offers us over a knee of snow,” said Lieutenant Colonel Eero Aija, Commander of the Scout Battalion.

This year’s Scout Battalion [Scoutspataljon or Eesti Scouts] exercise WINTER CAMP is a tank and pioneer unit of Allied units subordinated to the Scout Battalion companies, which is developing the military thought world of commanders of all levels within the exercise. “In defending Estonia, we are acting as a united fist, and therefore it is important to be able to think about how to best integrate the capabilities of the Allies into the plans of units of different levels, as well as how to neutralise the weaknesses of heavy equipment, already in peacetime,” added Lieutenant Colonel Aija.

Lieutenant Colonel Jim Handfield, Commander of the Allied Battlegroup, pointed out that the exercise was important to the UK Allied unit serving in Tapa for three reasons. “First of all, being part of Estonia’s defence plan, our soldiers must be successful even in very demanding winter conditions. Secondly, the development of interoperability requires constant training to refine the procedures used in different conditions, and thirdly, by training in the harsh conditions unknown to them, my soldiers gain knowledge of their abilities and the belief that they can cope in any situation.”

On the first day of the WINTER CAMP exercise, the battalion was trained, where both the assets of the Allied battle group and the battalion’s own Defence Forces performed an opposing unit for the companies of the Scout Battalion. As of today, the Allied units are subordinated to the companies, and until Thursday, fighting in winter conditions will take place at the group level. The exercise culminates in battles on Thursday and Friday, in which battalion companies and their intelligence companies and the United Kingdom Defence Forces practise conventional combat operations against each other.

¤ The accompanying photographs were taken on 8th and 11th February 2021