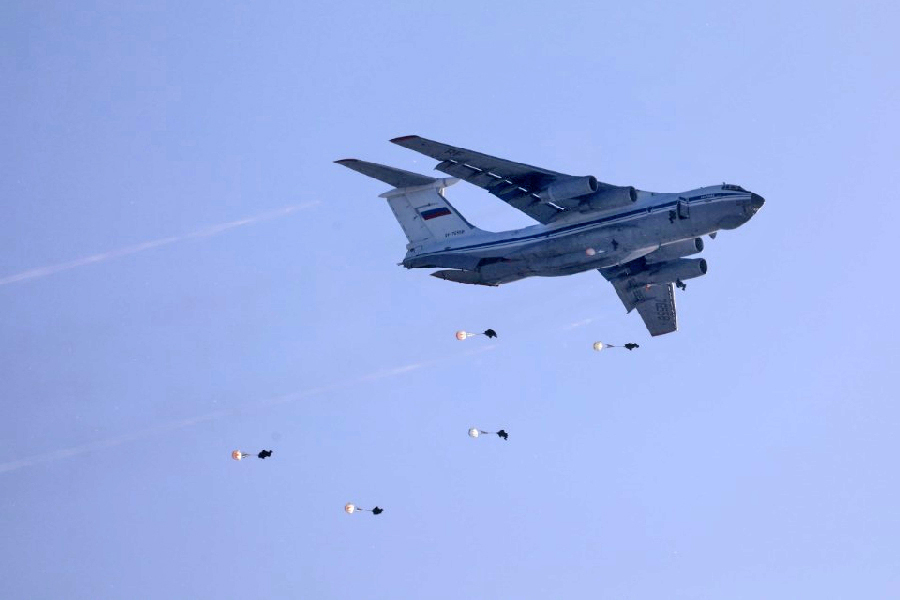 Russian servicemen of two regiments have completed combat training for the landing of an airborne battalion and the capture of an airfield.

Russian MoD News Release, 11 February 2021: [auto-translation] More than 1,000 paratroopers destroyed the command post and the training camp of the notional illegal armed group during the second stage of the command and control exercise with two regiments of the Ivanovo airborne unit.

During the second stage of the large-scale command and staff exercise (KShU) with the parachute and artillery regiments from Kostroma, the Ivanovo Guards unit of the Airborne Forces, more than 1000 servicemen, three BMD-2K-AU airborne combat vehicles and four Rheostat observation and artillery fire control vehicles participated.

Military transport aviation Il-76MD aircraft from the Ivanovo-Severny airfield brought forward detachments to the Budikhino landing site in the Kostroma region to capture objects of a simulated enemy and a training camp for illegal armed formations. The landing of personnel was carried out using D-10 parachute systems from a height of 600 metres and on special-purpose parachute systems of the Crossbow-2 ‘wing’ type.

The loading of personnel into military transport aircraft took place secretly in the early morning at the Ivanovo-Severny airfield [300km north-east of Moscow]. In accordance with the concept of the exercise, the personnel seized objects of a simulated enemy and a training camp for illegal armed formations.

“Today, the servicemen of the two regiments completed combat training missions for the landing of an airborne battalion on the landing site and the capture of a field airfield,” explained the head of the exercise, acting commander of the Ivanovo Guards airborne unit, Guards Colonel Alexander Kornev. “In the future, the paratroopers will have to march to the Pesochnoe training ground in the Yaroslavl region, where the paratrooper battalion will manoeuvre in defence with the stages of combat firing.”

Command and control operations with airborne assault and live firing were conducted under the leadership of the Acting Commander of the Ivanovo Guards Airborne Force of the Guards, Colonel Alexander Kornev, from February 8 to 11 in the Ivanovo, Kostroma and Yaroslavl Regions in order to check the readiness of the military units of the formation for planning combat operations and practical application divisions.