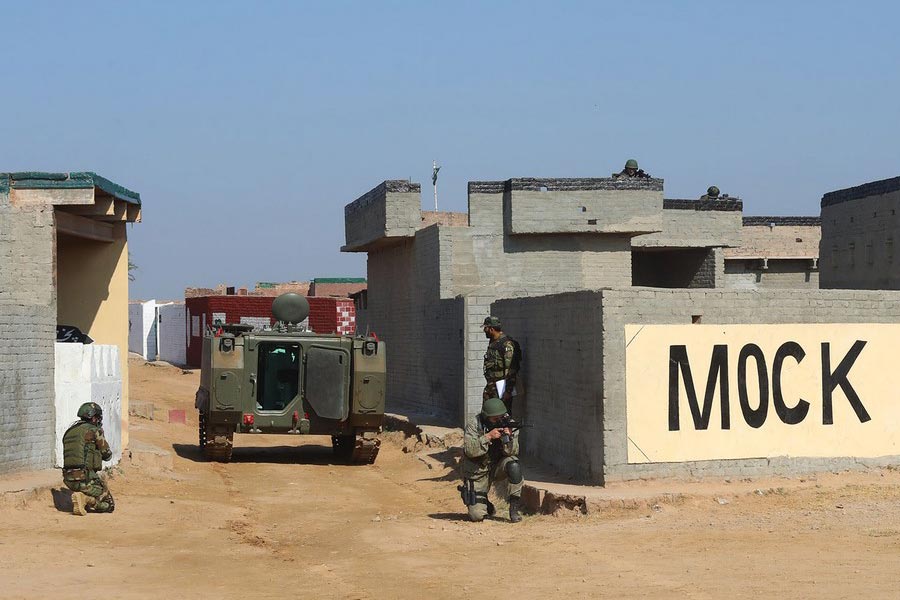 Russian MoD Press Release, 18 November 2020: [auto-translated] During the storming of the city and the destruction of the ‘terrorists’, the servicemen of Russia and Pakistan freed the hostages and provided assistance to the notionally wounded during the DRUZHBA-2020 [FRIENDSHIP-2020 ] exercise.

According to the exercise plan, a group of terrorists had become entrenched in a residential building. To destroy them, Joint Special Forces groups of the two countries were involved. Some units performed rope descents from a Mi-17 helicopter and marched into the area of the Special Operation, others were inserted from M113 armoured personnel carriers (APCs) of the Pakistani Armed Forces.

During the cleaning of the buildings, mixed reconnaissance groups secretly made their way into the territory of the seized object and carried out assault actions. The servicemen also provided first aid to the notionally injured as a result of an explosion and worked out their evacuation on the M113 armoured personnel carriers. For the first time during the assault, the teams communicated in Urdu and Russian at the same time.

Russian Special Forces have gained experience in joint actions at a foreign training ground. To create conditions as close as possible to combat, imitation devices were used, including imitation mines, smoke bombs and blank cartridges. To disorient the enemy, sappers from the mixed groups of Special Forces of Russia and Pakistan secretly set up charges with a total mass of more than 1 kg in TNT equivalent and detonated at a remote distance in the area of the Special Operation.

Combat training tasks were worked out on the basis of the Pabbi National Anti-Terrorist Centre in preparation for the final stage of the joint military exercise FRIENDSHIP-2020. The first stage of the exercise took place in the training centre for Special Operations Forces (ССО or MTR) of the Pakistani Armed Forces in the settlement of Tarbela. More than 150 servicemen of the MTR units of the Pakistani Armed Forces and a Special Forces company of the Southern Military District (ЮВО or YuVO) were involved in the exercise. The closing ceremony was November 19th.

For reference: The purpose of the joint exercise was to strengthen and develop military cooperation between the armed forces of the Russian Federation and the Islamic Republic of Pakistan.

The joint Russian-Pakistani exercise FRIENDSHIP [DRUZHBA] has been held since 2016, in which servicemen of the Mountain Motorised Rifle Brigade and the Special Forces Company of the Southern Military District, stationed in Karachay-Cherkessia and the Stavropol Territory, take part from the Armed Forces of the Russian Federation.