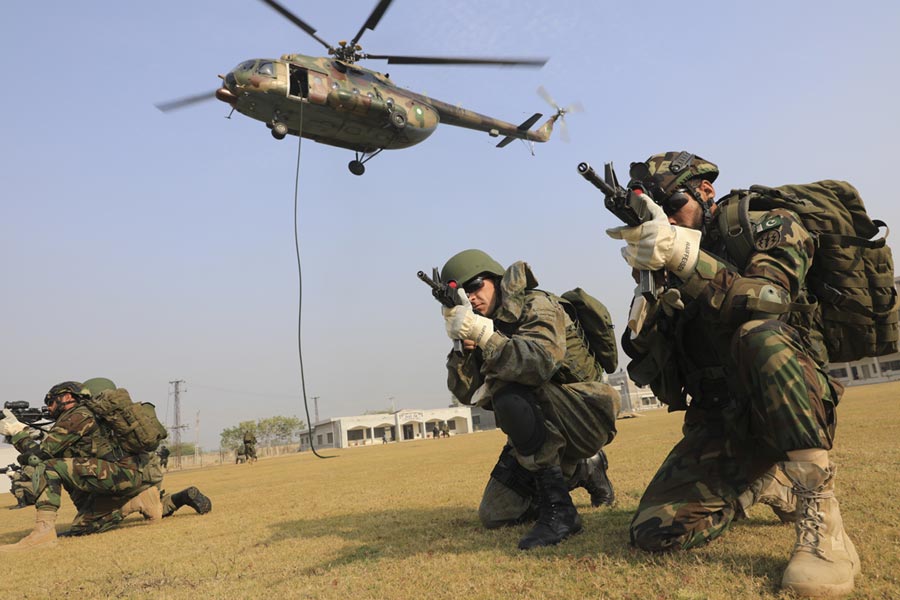 The Russian Federation Ministry of Defence has released a second batch of images from the SpecOps Joint Exercise DRUZHBA-2020 in Pakistan.

Russian MoD Press Release, 16 November 2020: [auto-translated] Russian and Pakistani military personnel demonstrated joint tactical actions at the FRIENDSHIP-2020 [DRUZHBA-2020] international exercise to the representative of the Pakistani ground forces command, Major General Akhtar Nawaz. The first stage of the joint military exercise was carried out on the territory of the Special Operations Forces’ training ground in the Tarbela settlement in Pakistan.

“We are deeply convinced that such exercises not only benefit our states, but also increase our level of coherence and mutual relations. They also help maintain peace and stability throughout the region. Such exercises help us to better understand each other, take a different look at traditions, learn from each other something new, and also increase the stability of security in the region,”said Major General Akhtar Nawaz, spokesman for the Pakistani Ground Forces.

“I looked at how the teachings are going and am more than satisfied with what I saw. And I am also very glad that you feel comfortable and that all the necessary conditions have been created for you,”said Major General Akhtar Nawaz.

“I am deeply convinced that at the next stages of the exercise you will find more complex, rich and interesting episodes of combat training Special Operations. After the exercise, you will leave a wealth of experience for our servicemen, in turn, you will be able to share this experience with your comrades at home,”added Major General Akhtar Nawaz.

To assess the actions of military personnel, dome cameras were installed at the training sites, with the help of which video content was broadcast in real time on the screens of monitors. More than 150 servicemen of Special Operations Forces (MTR) of the Islamic Republic of Pakistan and a Special-Purpose Company of the combined-arms army of the Southern Military District (YuVO) stationed in the Stavropol Territory were involved in the exercise.

During the training, the personnel of the Special Forces carried out assault actions in urban conditions, blocking the urban area, conducting hostilities inside the building, when overcoming inter-floor passages, as well as releasing hostages from illegal armed groups. In addition, the servicemen exchanged experience of joint actions in mountainous and wooded areas in isolation from the main forces, covert movement and action of snipers using Remington 700 and M24 rifles, as well as parachute-free landing from a Mi-17 helicopter of domestic production, which are in service with the Pakistan Air Force. The servicemen performed tactical techniques when advancing to the line, opening fire and worked out coordinated actions as part of a combat two, three when performing tactical techniques on the ground.

In this exercise, for the first time, Russian servicemen perform combat training tasks using M4 assault rifles, Glock pistols, equipment and communications equipment of Pakistani ground forces. In addition, for the participants in the exercise, the Pakistani side held demonstration performances by the military personnel of the ground forces.

The servicemen demonstrated methods of protection, shock and waste equipment with the use of small arms. A spectacular episode of the event was the pursuit in cars of conditional terrorists who took hostages. In the course of the battle, the conditional terrorists were destroyed by an assault group in off-road vehicles. In addition, concentrated fire was provided by snipers. As a result of the actions of superior forces, the ‘hostages’ were released. The final stage of the demonstration event was the performance of paratroopers who jumped from a helicopter from a height of 5,000 metres, while they overcame 3,500 metres in free fall. Then, on guided parachute systems, they carried in free flight the state flags of the Russian Federation, the Islamic Republic of Pakistan, as well as the flags of the Pakistani armed forces and the Special Operations Forces of the Pakistani ground forces.

The next stage of the exercise will take place at the National Anti-Terrorism Center in the village of Pabbi, Islamic Republic of Pakistan.

For reference: The joint Russian-Pakistani exercise ‘FRIENDSHIP’ has been held since 2016, in which servicemen of the mountain motorised rifle brigade and the Special Forces company of the Southern Military District, stationed in Karachay-Cherkessia and the Stavropol Territory, take part from the Armed Forces of the Russian Federation. The exercise will last until November 19.