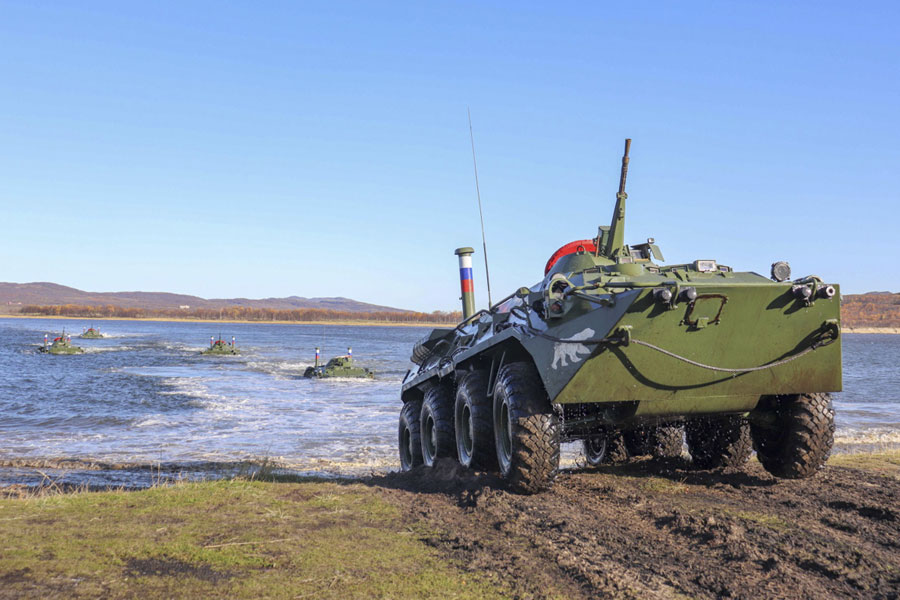 A Russian tactical exercise with the Northern Fleet Marines was held in the Pechenga district of the Murmansk region.

Press Release, 28 September 2020: [auto-translated] The personnel of the Northern Fleet Marine Corps have worked out the tasks of tactical exercises in the Far North and the Arctic. The exercises were held in the Pechenga district of the Murmansk region, more than 500 Marines and more than 60 units of military and special equipment were involved in them: helicopters, landing boats and high-speed boats, armored personnel carriers, multiple launch rocket systems and wheeled vehicles.

During the event, Marines’ combat skills were worked out in the conditions of the city, mountainous and forest areas, overcoming water obstacles and landing on an unequipped sea coast, as well as inflicting defeat on a simulated enemy during defensive actions and in a counterattack.

Personnel of the reconnaissance units carried out the assault on a building seized by mock terrorists and worked out the release of the hostages. At the same time, the servicemen used the skills of assault training, landing from a helicopter on the roof of a captured building.

In the course of training and combat operations on the ground, the Marines worked out forcing the Pechenga Bay, fought for the landing of amphibious assault forces on the coast, and worked out the tactics of capturing fortified positions of a conditional enemy.

The exercise ended with a stage of live firing, during which, at the military range, the personnel of the rocket artillery battalion from the Grad MLRS hit target positions denoting the equipment and manpower of the simulated enemy. After completing the tasks of the exercises, the servicemen and military equipment arrived at the point of permanent deployment – the Sputnik garrison.