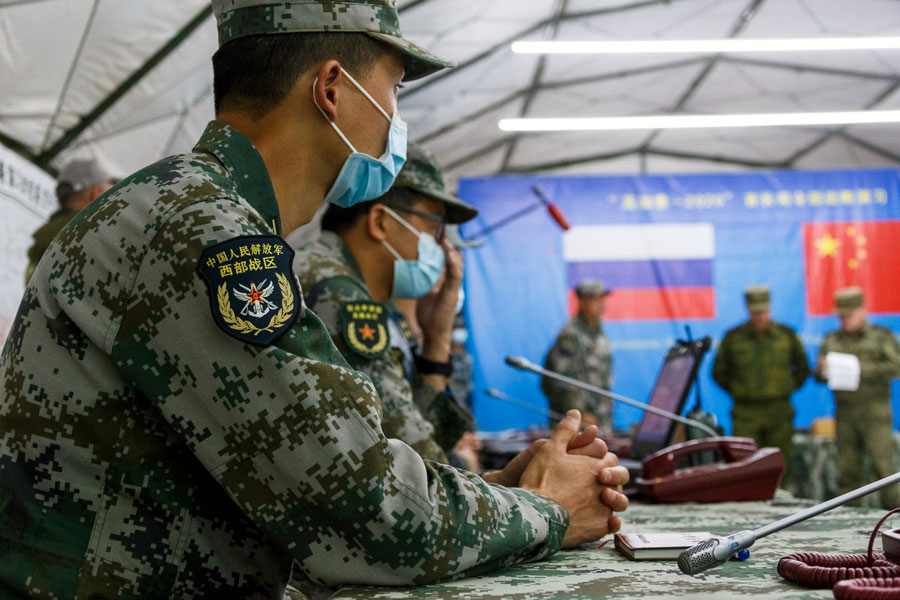 An award ceremony has been held for participants of the KAVKAZ-2020 manoeuvres at the Kapustin Yar training ground in the Astrakhan region.

Press Release, 26 September 2020: An award ceremony was held for participants of the manoeuvres KAVKAZ-2020 [CAUCASUS-2020] at the Kapustin Yar training ground in the Astrakhan region. Deputy Defence Minister of the Russian Federation Lieutenant General Yunus-Bek Yevkurov congratulated the units of Armenia, Belarus, China, Myanmar, Pakistan and Russia on the successful completion of international manoeuvres.

The Russian Deputy Defence Minister stressed that the manoeuvres KAVKAZ-2020 was purely defensive in nature and was not directed against other countries. “The military personnel of the six states successfully coped with the tasks set, having worked out the use of a coalition group of troops in the fight against armed formations of international terrorist organizations,” said Evkurov.

Representatives of the command of foreign military contingents, in turn, thanked the Russian side for organising the manoeuvres, hospitality and acquired combat training experience. In a solemn atmosphere, participants of the international exercise from Armenia, Belarus, China, Myanmar, Pakistan and Russia were awarded the medal of the Russian Defence Ministry ‘For Strengthening Military Cooperation’ for the effort shown during the preparation and holding of the manoeuvres KAVKAZ-2020.

After lowering the symbolic flag of the manoeuvres KAVKAZ-2020 the troops marched to the sounds of a combined military band. At the end of the event, military artists of song and dance ensembles of the Southern Military District, the Black Sea Fleet and creative teams of formations and military units of the Southern Military District performed a concert program for the participants of the manoeuvres.

¤ The manoeuvres KAVKAZ-2020 were held under the supervision of the Chief of the General Staff of the Armed Forces of the Russian Federation – First Deputy Minister of Defence of the Russian Federation General of the Army Valery Gerasimov from 21 to 26 September 2020 at internal sites of the Southern Military District – Prudboy, Ashuluk, Kapustin Yar, aviation ground ranges Arzgirskogo and Kopanskaya, and in the waters of the Black and Caspian seas.

In the course of the exercise, questions of the use of groupings of troops (forces) of the coalition of states in the interests of ensuring military security in the southwest of the Russian Federation were worked out.

The manoeuvres KAVKAZ-2020 was attended by servicemen of the Ministry of emergency situations and National Guard, as well as up to one thousand military personnel from Armenia, Belarus, Iran, China, Myanmar and Pakistan. Up to 12,900 military personnel were involved in episodes that fall within the scope of the 2011 Vienna document on confidence-and security-building measures.

Press Release, 25 September 2020: The manoeuvres KAVKAZ-2020 ended with the defeat of the ‘enemy’ by a coalition group of troops.

The draw of the main stage of the manoeuvres KAVKAZ-2020 at the Kapustin Yar training ground in the Astrakhan region ended with the defeat of the enemy by a coalition group of troops. Russian President Vladimir Putin watched the actions of the troops at the training ground.

The troops of the coalition group consisting of units of the Armed Forces of the Russian Federation, the Republic of Armenia, the Republic of Belarus, the People’s Republic of China, the Union of Myanmar and the Islamic Republic of Pakistan completely defeated the enemy group at the Kapustin Yar training ground as a result of a counter-offensive operation.

The coalition forces carried out a massive fire attack, gained fire superiority and inflicted maximum losses on the mock enemy. Operational and tactical landing delayed the advance of its reserves and created conditions for a counter-attack. With deep covering flank attacks in two converging directions, the coalition was able to encircle the forces of the enemy’s strike group, after which it delivered the main strike and forced the enemy to stop military operations.