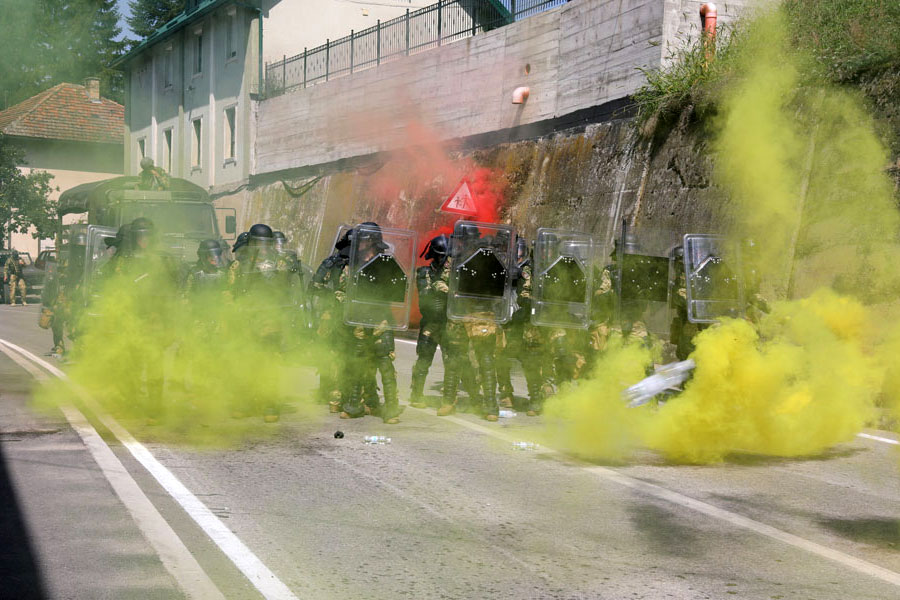 EUFOR Press Statement, 31 August 2020: Starting this morning in Visegrad with a simulated protest which quickly turned into bottles and smoke grenades being thrown at the EUFOR troops. This prompts a smooth response from the nearby LOT House (Liaison Observation Team) which is permanently staffed with EUFOR Slovak soldiers, who called in the Multinational Battalion to help clear the protest.

The Hungarian soldiers from the Multinational Battalion had little trouble in deterring further violence and soon had the situation under control as the troublemakers were cleared from the street and their makeshift road block moved.

The Exercise Director then adds something else to think about with a simulated casualty from a thrown rock. Medical aid is quickly on hand and the casualty is first treated on the spot by medical experts before calling in the EUFOR helicopter to further test the response. Flying quickly from Camp Butmir, the medical helicopter soon collects the casualty and has them on the way back to a medical centre to test the reaction some more.

In Visegrad to witness the exercise first hand was COM EUFOR Major General Reinhard Trischak who said; “The way the multi-national force worked together today was extremely pleasing to see. Integration time is understandably short and we have to make the most if it. It is clear to me that the training staff at Camp Butmir have done a fantastic job.”

“There will be little rest for the troops, as tomorrow there will be another early start and more unalerted problems to resolve until Exercise QUICK RESPONSE 2020 concludes on 5 September 2020.”

Background: Every year EUFOR tests contingency plans and the capability of designated high-readiness forces outside the country to fulfil its mandate. The rehearsal also reaffirms and strengthens the close cooperation we have with local authorities, Law Enforcement Agencies and the Armed Forces of BiH.

This summer, we have selected forces from Austria, Bulgaria, Greece, Hungary, Italy, Romania, the United Kingdom and KFOR to join the troops in theatre. 20 nations united under EUFOR Command clearly demonstrates our continued commitment to security, stability and progress in BiH.

¤ Other QUICK RESPONSE 2020 Day One Highlights photos show both Austrian and British contingents in action on Monday. The British troops deployed to Bosnia are from 3rd Battalion of the Parachute Regiment [3 PARA] who have taken several of the FOXHOUND POV (Public Order Vehicle) with them.