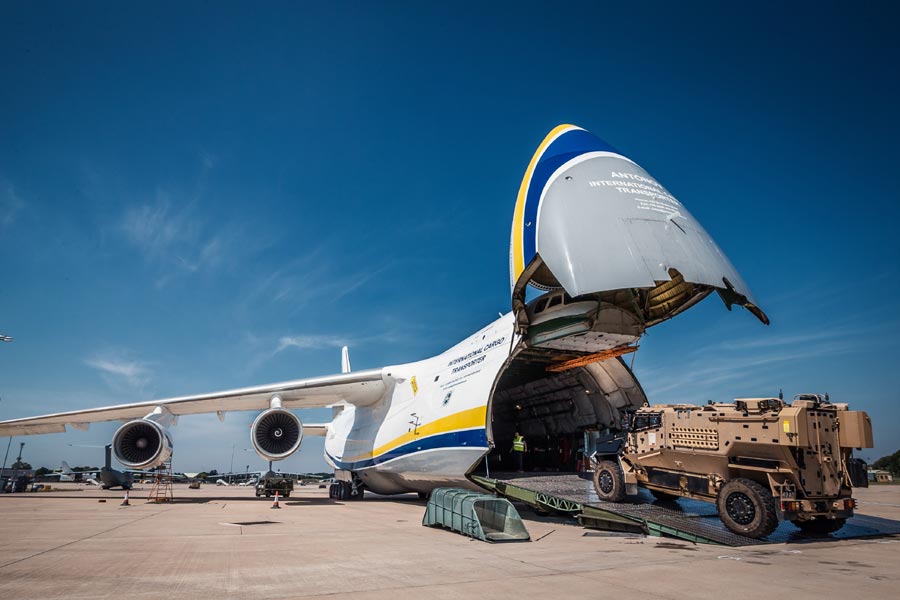 First spotted on display in January 2019 at the IAV (International Armoured Vehicles) conference and exhibition in London, FOXHOUND POV is the replacement for the Land Rover Defender CAV 100 (Snatch) which saw service for over 25 years, making its operational début in UN markings in Bosnia in 1993 and seeing its swansong in the same country in EUFOR markings in 2019. This new Public Order Variant of FOXHOUND LPPV (Light Protected Patrol Vehicle) has now also been deployed to Bosnia, on Operation ALTHEA (called Operation ELGIN by UK MoD).

On 3rd August a contingent of British Army troops from 3 PARA arrived in Sarajevo Airport to prepare for the arrival of their main force and specialist vehicles for Exercise QUICK RESPONSE 2020 or QR2020; an annual EUFOR (European Force) multinational training deployment to validate the ability of contributing nations to quickly reinforce the peace support mission if required. Following a compulsory 14-day isolation period, this advance party joined those EUFOR personnel on permanent deployment at Camp Butmir on the outskirts of Sarajevo, the capital of Bosnia and Herzegovina or BiH.

One week later the main UK contingent, drawn primarily from A Company of the 3rd Battalion on the Parachute Regiment (3 PARA) arrived from the UK by RAF C-130 Hercules after also having undertaken the mandatory 14-day quarantine. The first of their new FOXHOUND POVs were also flown in from RAF Brize Norton aboard a commercial Antonov An-124-100M-150 heavy transport aircraft for the forthcoming exercise, which commences at the end of this month.

During QR2020 the British Para contingent will form part of the EUFOR Multinational Battalion which is being reinforced by additional elements from Austria, Bulgaria, Italy and Romania and will also include troops from the NATO Kosovo Force Tactical Reserve Battalion. At Camp Butmir the troops from a total of 20 contributing nations are now participating in an intensive training and integration phase to “ensure maximum benefit” during the live phase of the exercise in early September.

Full details of the POV conversion to the FOXHOUND LPPV for riot control duties had not been released when we photographed it some 19 months ago but the recent photographs released by UK MoD and EUFOR reveal that the modifications are primarily minor and mostly relate to protection of lights and glazing from thrown missile damage plus measures, including removal of thermal camouflage, to defeat ‘Molotov cocktails’ and the like. At this stage I do not plan to draw further attention to detail save to say that changes to address different types of threat from those seen in other operational theatres where this vehicle is currently deployed have clearly been incorporated and specialist equipment unnecessary for operations in a civilian disturbance scenario has been removed; having photographed in some depth since the 1980s the evolution of the armoured Land Rover for urban security duties, including quite extensively in Ulster during the later stages of ‘The Troubles’, I have spotted some similarities with FOXHOUND POV but for OPSEC we will leave it at that for the moment.

Prior to the COVID-19 outbreak I had tentatively planned to cover QR2020 myself, not least because the 25th Anniversary is looming of both my flight from Gornji Vakuf into Sarajevo Airport in a Commando Sea King pumping out flares and my epic return flight after darkness aboard an Army Lynx with no doors, but pandemic travel restrictions knocked my 2020 plans on the head. As the UK is withdrawing from EUFOR when it leaves the EU, this could also be the last time British troops participate on a QUICK RESPONSE exercise. As for FOXHOUND POV, with a little bit of luck the MoD will display an example at the delayed Defence Vehicle Dynamics expo in late autumn, and if they do I will try to provide more coverage.

The above QR2020 photographs from Brize Norton and Sarajevo were released by UK MoD (on Monday 17 August) and the Operation ALTHEA Press Office in BiH (between 3rd and 15th August). I will be watching out for more official media releases on this interesting deployment exercise over the next few weeks. In the meantime you can read more about Op ALTHEA / ELGIN and a previous QUICK RESPONSE exercise on these QR2018 links.