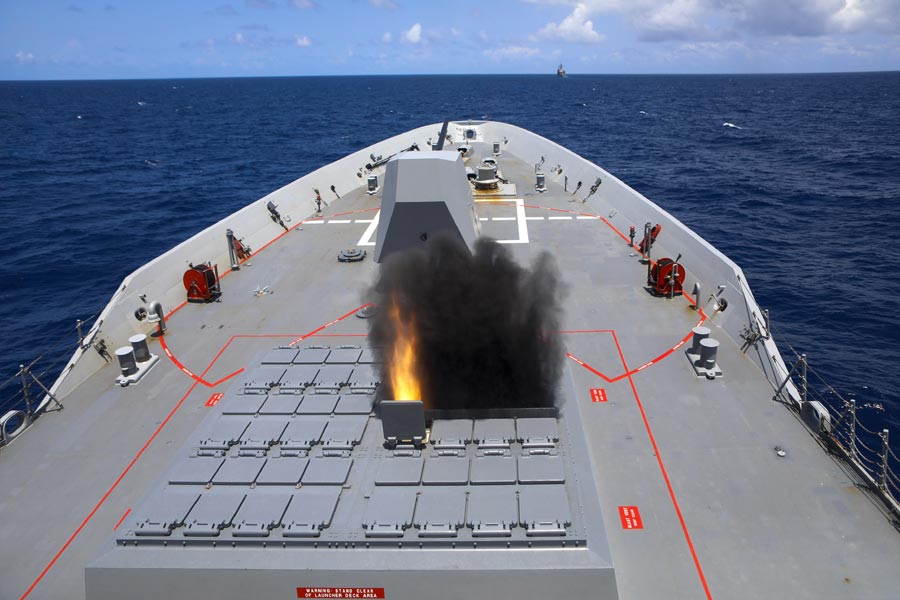 An SM-2 standard missile is launched from HMAS Hobart off the coast of Hawaii during Exercise Rim of the Pacific [Commonwealth Copyright: LSIS Ernesto Sanchez]

HMAS Hobart has become the first Hobart-class guided missile destroyer to conduct a live fire at Exercise RIMPAC or Rim of the Pacific.

ADoD News Release, 27 August 2020: HMAS Hobart has become the first Hobart-class guided missile destroyer to conduct a live fire at Exercise Rim of the Pacific, making it the most sophisticated and lethal warship ever operated by the RAN. Alongside ships from the United States and Canada, Hobart successfully fired an SM-2 against an unmanned target as part of the exercise scenario.

Commanding Officer Hobart Commander Ryan Gaskin said the missile firing proved the ship was ready to fight and win at sea as part of a joint force. “RIMPAC provides Navy with a unique training opportunity to strengthen international maritime partnerships, enhance interoperability and improve our readiness for a wide range of potential operations,” Commander Gaskin said.

“This year has also proven the ability to operate in company with partner nations at sea during a global health crisis through the employment of strict COVID-19 safe measures on board.”

HMA Ships Hobart, Stuart, Arunta and Sirius, which are on a Regional Presence Deployment through South-East Asia and the Pacific, are taking part in RIMPAC.

Commander Gaskin said credible, ready-maritime partners helped to preserve peace and prevent conflict in the region. “The Indo-Pacific has experienced economic prosperity largely because of the security and stability that exists at sea,” he said.

“We train to ensure the ability to deter disruptions to global supply chains and threats to lines of communication and commerce.”