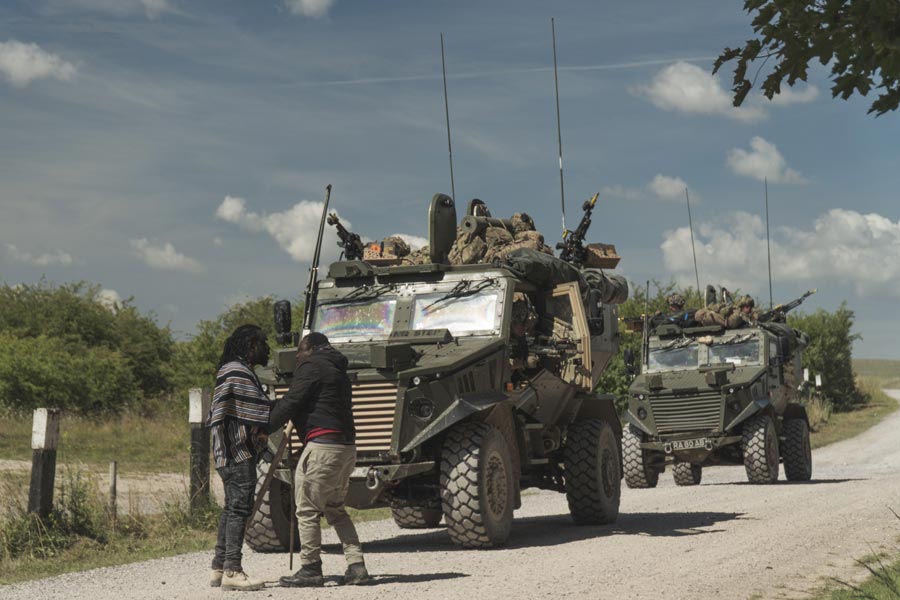 Pictured is a scenario in which two locals are seen arguing as they block the British troops on the road [Crown Copyright: Daniel Harrison]

UK troops deploying to the United Nations Peacekeeping operation in Mali have reached a training milestone in preparation for their MINUSMA deployment.

UK MoD News Release, Wednesday [sic] 28 July 2020: UK troops deploying to the United Nations Peacekeeping operation in Mali have reached a significant training milestone in preparation for their mission, which starts in December 2020.

Over 14 days, soldiers from the Light Dragoons and 2 Royal Anglian joined together for the first time on Salisbury Plain to begin their mission specific training. It is the start on months of preparation where they will be honing skills around reconnaissance, intelligence gathering, patrols and medical evacuation.

The unit will act as the Long-Range Reconnaissance Task Group to the UN peacekeeping operation MINUSMA. Part of their non-combat role will be to conduct patrols in Jackal vehicles to provide situational awareness and intelligence that will help the UN mission to protect civilians and progress towards a sustainable peace in Mali.

Commander Officer of the Light Dragoons, Lt Col Thomas Robinson said: “This exercise is part of an intensive training package. Over recent months we have been honing our specialist skills and now we have brought all aspects of the Task Group together to operate as a highly professional and effective peacekeeping force.”

Terrorist violence and conflict is sharply on the rise in Mali and the wider region. Marked by chronic poverty, instability, high levels of gender inequality, and one of the world’s most vulnerable regions to the effects of climate change, the Sahel remains one of Africa’s most fragile regions.

The deployment also supports UK engagement in the Sahel under HMG’s new strategic approach to Africa, which includes support and training to Commonwealth partners. We are bringing top-class British expertise to the areas of greatest need in UN peacekeeping missions.

The new operation follows a successful three-year commitment to the UN peacekeeping mission in South Sudan, where British engineers and medics built and repaired much-needed hospitals and military bases. It also forms part of a wider offering in West Africa, where the UK is working with regional partners across defence, diplomacy and aid to contain the spread of instability from the Sahel to other parts of West Africa and the world.

Editor’s Comment: Much as we would have liked to have provided a first-hand report of this “significant training milestone” involving troops on the delayed UK contribution to MINUSMA, announced 12 months ago and believed originally scheduled for deployment July/August 2020, current MoD ‘news’ policy seems to be to self-generate content (i.e. create propaganda) rather than grant access to independent defence journalists. Historically when a nation resorts to creating propaganda about its armed forces rather than allowing independent media coverage it is because it has something to hide. Might this be the case with Whitehall? If UK MoD (or any UK Forces Commanding Officer) should decide they wish to see a return to independent news coverage of troops and equipment in the field, the career defence journalists on the JOINT-FORCES.com team are always keen to engage where and when feasible.