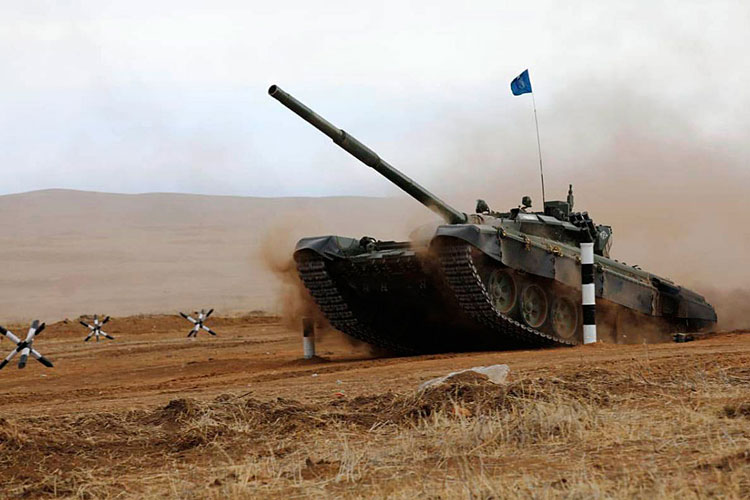 Combined Arms Formation tank crews from Primorye and Buryatia have competed in the Eastern Military District stage of the Russian Army Tank Biathlon.

News Release, 17 March 2020: At the Borzya Novaya training ground of the Eastern Military District (EMD), an individual race is held between tank crews of combined-arms formations stationed in Primorye and Buryatia as part of the district stage of the ‘Tank Biathlon’ competition.

The tankers drove three laps of about 6 kilometres each, consisting of sections of varying complexity. The tank crews overcame such obstacles as an escarpment (a concrete structure up to 1 metre high), an anti-tank ditch 2 metres deep, a ‘snake’, a slope and a track bridge, as well as a passage in a mine-explosive barrier. For not overcoming obstacles, the vehicle was taken to the penalty time area, where the crews performed the standard ‘Control inspection of the vehicle’.

After each lap, the tankers fired at targets simulating a tank, helicopter, BMP, and a hand-held anti-tank grenade launcher, located at a distance of 600 to 1800 metres. The defeat of targets for the crews was complicated by strong gusts of wind. The results of the arrival of tank crews at the ‘Individual Race’ stage were determined by the total time for passing the trail.

At the next stage of the competition, tankers will have a team relay, as well as a sports stage where they will have to compete in strength and endurance. During the relay, shooting from a tank gun is carried out on the move, and from a paired and anti-aircraft machine gun from the spot.

The coaching staff of the formation of the district, stationed in Buryatia, includes world Champions in ‘Tank Biathlon’ last year, Ivan Oseev and Bato Tsydypov.