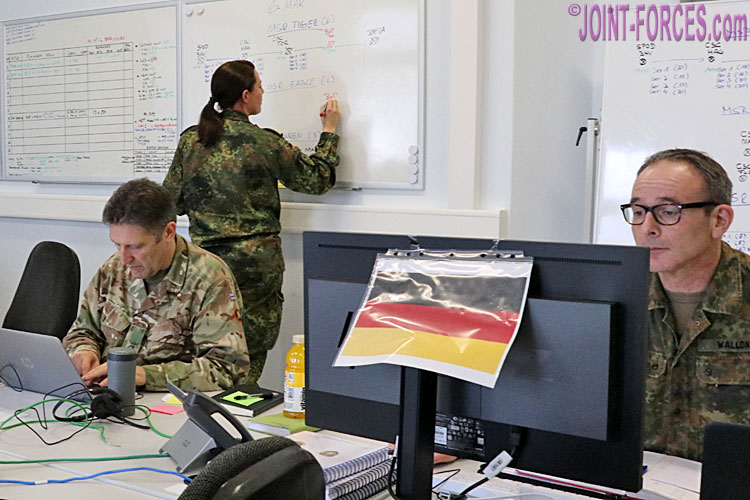 Last week we were invited into the US-led DEF20 (DEFENDER-Europe 20) RMCC and JSCC to watch how movement and security for the exercise is being coordinated, reports Bob Morrison.

The purpose of the RMCC (Regional Movement Control Center) is to de-conflict, coordinate, enforce and manage all movements of forces supporting DEFENDER-Europe 20.

The RMCC is led by a German Oberstleutnant (Lieutenant Colonel) and currently consists of representatives from Denmark, Germany, Netherlands, UK and United States, though as the forces move eastwards specialists from Poland and the Baltic States will also integrate. Concurrently, the JSCC (Joint Security Coordination Center) which is co-located in the same HQ liaises with Allies and Partners to coordinate and maintain a secure environment.

Oberstleutnant Ralf Mockler, the officer in charge of the RMCC, commenced the series of briefings we received by explaining that the RMCC is the central hub for the movement of forces coming in from the US, taking them from their Points Of Entry – i.e. various harbours and airports in Belgium, Netherlands and Germany – and crossing over Europe to their training areas in Poland and the Baltics region. The main issue, in NATO terminology, is RSOM or Reception, Staging and Onward Movement. Lt Col Mockler further explained: “That means we are taking those forces coming into the harbours and airports, we receive them, we take care that the equipment and the materiel will be married together, then we move them forward with different modes of transportation, by airlifts, by barges, by convoys, or by civil line haul along different routes to their final destinations.”

The overall plans for the massive DEFENDER-Europe 20 (DEF20) deployment, which will see around 20,000 US-based troops temporarily brought across the Atlantic for a series of linked exercises in the late spring, were worked out by the US Army’s 21st Theater Sustainment Command which is based in Kaiserslautern in Germany. One of the major planners was Lt Col William Kost who during the DEF20 deployment is Lt Col Mockler’s deputy at the RMCC.

Lt Col Kost now took over the briefing: “My normal job, I’m stationed at 21st TSC [21st Theater Sustainment Command] in our Theater Movements Center, and my counterparts within the Center made the plan to bring in all the forces from the United States and from the Preposition Sites here in Germany and in Belgium and then, as Ralph mentioned, coordinate that onward movement plan. We have the Host Nations, the Transit Nations and the Host Receiving Nations, to use NATO terminology.”

The bulk of the small cadre of journalists present were from the local region, though a German-based reporter representing Russian media outlets was also in attendance, and the question on many lips was why did the US Army stand up the RMCC in Germany? Lt Col Kost addressed this question: “It’s mainly to harmonise, to synchronise all of those movements because currently within the European Union, within all the European countries, the paperwork requirements for movement requests, diplomatic clearances and permissions to enter each country are not synchronised. They are not all the same.”

By bringing the US forces into the RMCC as well as Allies and some Partners from their own National Movement Coordination Centres, 21st TSC is better able to put the pieces of the puzzle together as they support the movements of all the cargo – ISO containers and plant as well as tracked and wheeled vehicles – from seaports and staging areas to the final destinations three or more countries distant.

“Since DEFENDER 20 is a US Army exercise with multinational participation, and not a NATO exercise with Allied and Partner participation,” Lt Col Kost continued, “we are hosting this here [at the 21st TSC base]. This RMCC would probably normally be in a NATO Headquarters, in a Joint Logistic Support Group Movement & Transportation Branch, with representation / augmentation from all of the same types of elements in order to synchronise, identify issues early, and work through problem sets.”

In simple terms, the RMCC is supporting the movements of all incoming forces in line with the Host Nations’ rules and regulations for peacetime. As the last time an operation on this scale was performed in Western Europe was during the annual REFORGER (Return of FORces to GERmany) exercise series, which ran virtually uninterrupted from 1967 through to 1992 – REFORGER ’93 only involved German-based US units – and as there are very few still in uniform who were involved in even the most recent of these deployments, a lot of lessons are being relearned and more modern challenges are having to be met.

Lt Col Kost then handed over to Lt Col Parks, LT Col Mockler’s deputy running the JSCC, who introduced himself as being with the 7th Mission Support Command as their Operations & Plans Officer and commenced by stating: “DEFENDER-Europe, as we know, is one of the largest exercises we’ve held in recent memory, for many of the soldiers, their living memory. They have never seen anything this large before.”

“Knowing that Belgium, Netherlands and Germany have a robust capability, what we do is we are nested, integrated and have a comprehensive relationship within the headquarters of all three countries that we are transiting. Additionally, we have representation within the Joint Security Coordination Center here on Panzer Kaserne. So we have LNOs (Liaison Officers) at the headquarters but we also have LNOs in the States of Germany that we are going to be crossing; we have people in Hanover, in Dresden, in Berlin, and in a few other States.”

THE JSCC looks at four focus areas in Protection:

In regard to the Civil Population the JSSC examines how the Forces are going to impact them and vice versa. They look at our routes in advance, and as they are transiting, to see if there any potential obstacles or hazards and how they could mitigate their footprint on this.

Talking about the Anti-Terrorism aspect the colonel told us: “We have anti-terrorism information dissemination. We do no collection here but we understand what are the risks for our forces, we coordinate with local authorities for them to handle any threat or arrange for them to let us know so we can move the routes or delay the movement.”

The third strand is CBRNE or the Chemical Biological Radiological Nuclear and Electromagnetic component. The colonel continued: “This is a training venue for our folks. One of the things we [21st TSC] haven’t done in years is exercise our CBRNE capability. We know that Belgium, Netherlands and Germany have a robust CBRNE capability, mostly a civilian component. Our forces working with the civilian components of these governments will ensure we have training, we have interoperability, we understand how they react to any kind of threat. We can then mitigate.

“The threat is not just a CBRNE attack. What happens if there is a fuel spill, as that is still a hazardous material? This is something that we would have to coordinate, and that is possibly the most we would have to do, but again it gives us a great training venue for our folks.”

The final part is Force Protection overall, which sees the US nesting with not only the armed Military Police capability but also nesting with the Bundeswehr Military Police and nesting with the local Polizei to ensure if there is anything that may impact the freedom of manoeuvre of Forces through the Joint Security Area – which stretches from the North Sea Ports to the Polish border – all can coordinate with / through the RMCC and move or delay routes or make the decision that the issue is not as risky as originally thought.

As viewers will have no doubt noticed from the accompanying images, although there are no US Forces movements through the UK there is a sizeable British Army contingent at the RMCC, primarily provided by 104 [UK] Logistic Support Brigade of the Royal Corps of Transport. As we have seen over the last five weeks, 104 Log Sup is playing quite a large part in the deployment phase of DEF20 and their commanding officer, Brigadier Joe Chestnutt, has already explained how he has around 500 troops deployed at locations across Belgium, Netherlands, Germany and Poland with Port Operators at Antwerp and Vlissingen helping facilitate the movement of US Forces and materiel across Europe.

After our tour of the RMCC and the JSCC we asked one of the RLC officers currently based in the UK cell at Kaiserslautern if he had found any particular challenges or benefits to working in the multinational RMCC? He responded: “In a weird way I’d say that the challenges are actually the benefits of this exercise. It’s an interoperability exercise where we are trying to get multiple nations all working together under a single cause and there are always going to be friction points between certain legislation differences between countries, different capabilities that cause challenges along the way. That is the point of DEFENDER, that we learn of these issues now and come up with solutions so that if we were ever to have to work together for real we already have these solutions in place.”