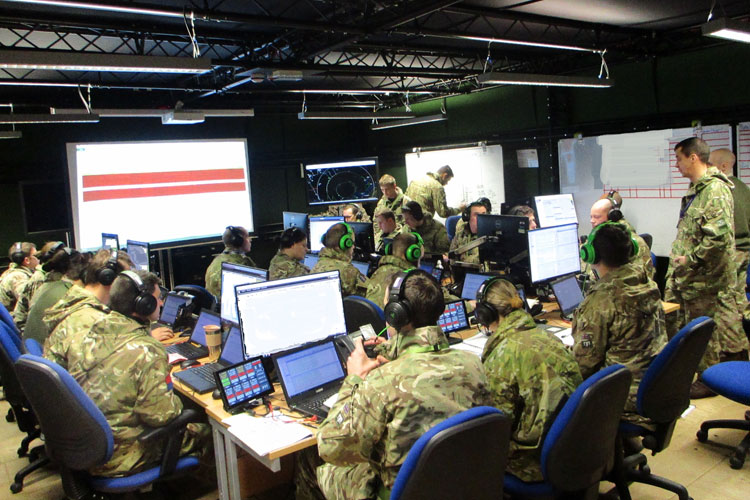 Press Release, Lincoln, 10 March 2020: Since 2017, Inzpire’s synthetic training experts have delivered three iterations of the week-long IRON DRAGON exercise, providing divisional level training at the Air Battlespace Training Centre at RAF Waddington. The exercise content has developed over the three-year period, with lessons learned from iterations one and two culminating in the design and delivery of the most recent exercise.

Over the three years, Exercise IRON DRAGON prepared personnel for future military exercises both in the UK and the United States and enabled trainees to develop skills in tactics, procedures, drills, and processes across Joint Fires and ISR domains. Personnel were taught how to operate within their cells and the exercise presented them with realistic challenges that they are likely to face in future exercises and operations.

Exercise IRON DRAGON 2020 provided training to 3rd (United Kingdom) Division. During IRON DRAGON 2020, exercise personnel also included allies from the United States 75th Field Artillery Brigade (United States) who provided insights in to how the training should be carried out to maximise learning potential ahead of future training in the US.

Bespoke training objectives: Throughout the three-year training period, 3rd (UK) Division set their own training objectives which Inzpire’s experts have used to create tailored exercises. To ensure future military requirements were met, the exercises were designed to incorporate other British Army personnel including 3 Army Air Corps and Offensive Support Group.

To enhance this bespoke training offering, before IRON DRAGON 2020 Inzpire representatives visited exercises taking place both in the United States and on Salisbury plain to enable them to replicate the challenges in a synthetic domain. Inzpire’s experts have been integral not only to the design but also to the delivery of these DRAGON exercises with their expertise leading to the creation of a fully-immersive learning environment. Inzpire’s personnel used their array of military operational experience to role-play specific air, land and maritime platforms.

Inzpire’s team also ran the after action review for each mission. After action review is one of the most vital parts of the training, giving participating personnel the opportunity to discuss team challenges, frictions and lessons that had been experienced during the exercise. In a display of the Whole Force Approach in action, the Inzpire team worked alongside serving military, QinetiQ, Plexsys and Boeing personnel.

“ The synchronisation of Integrated Action (IA), coupled with the optimisation of Divisional warfighting processes, remains the foundation for success and ensures that the Deep Battle remains genuinely focussed on ‘hunting and not fishing’. Alongside our international allies, Ex WARFIGHTER (WFX) 21-4 in the USA, is now the aiming marker”.

Andy Fisher, Inzpire training executive, commented: “I am hugely impressed with the Inzpire Operations Team at the ABTC for building Exercise IRON DRAGON from scratch and for delivering three iterations so expertly. Their success is testament to the team’s deep understanding of the land requirement, honed over several years. As a company we are proud of our achievements and honoured to be entrusted with delivering this top end training to the British Army and coalition partners”.