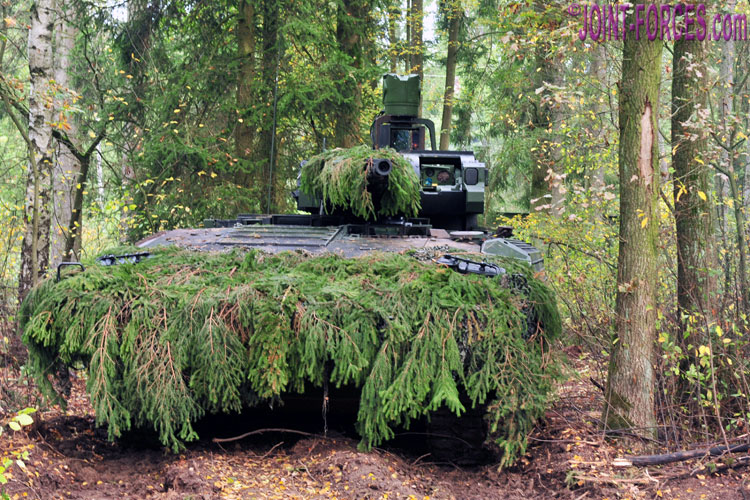 Aimed at improving the skills of the brigade in the art of conducting high intensity warfighting operations within a national and collective defence scenario, Exercise GRANTIGER LÖWE (GRUMPY LION) was divided in three phases. It also included a Key Leader Training event focused on narrow and medium wet gap crossings as part of offensive operations, the latter which JOINT-FORCES followed.

Formed in 1959 and belonging to 10. Panzerdivision (armoured division) the Cham-based Panzerbrigade 12 ‘Oberpfalz’ is one of five armoured and armoured infantry divisions of the German Army. The brigade is led by Oberst Björn Schulz and consists of the following units:

Three Phases: Phase I of Exercise GRANTIGER LÖWE 2019 basically saw the units of the bridge deploying from their various home bases to staging areas at the Grafenwöhr Training Area (GTA) in Upper Palatinate. The deployment was conducted in the form of tactical road marches, seeing long columns of wheeled and tracked tactical vehicles, including Leopard 2A6 main battle tanks, moving on public roads.

Phase II saw the participating units of the Panzerbrigade 12 conducting an extensive live fire package and tactical training on the Grafenwöhr Training Area (GTA) in Upper Palatinate and the Külsheim local training area in Baden-Württemberg. Also part of this phase was the Key Leader Training focused on narrow and medium wet gap crossings as part of offensive operations.

Phase III of Exercise GRANTIGER LÖWE 2019 was conducted in form of a Computer-Assisted Exercise (CAX) and took place at the Gefechts Simulations Zentrum des Heeres in Wildflecken in Bavaria.

Wet Gap Crossing: The aim of the Key Leader Training was to brief the key leaders of the units of the Panzerbrigade 12 ‘Oberpfalz’ in the operational procedures of the engineers when tasked to conduct narrow and medium wet gap crossing operations as part an of offensive operation and to give them an idea of the time required to establish different types of engineer bridges.

The training was conducted to the south of Luhe and the river that was crossed was the Naab. The training was conducted in form of a demonstration exercise organised by the Bogen-based Panzerpionier Bataillon 4. It started with a briefing about the scenario under which the offensive operation was conducted, as well as about standing operational procedures of the engineers and the equipment employed by them. This was followed by a demonstration divided into four phases.

Under Phase 1 reconnaissance assets of the engineers were deployed in order to ensure that the planned crossing points were practicable. Phase 2 saw the attacking forces reaching the Naab river and Schützenpanzer Puma armoured infantry fighting vehicles and Leopard 2A6 MBTs deploying into overwatch positions, before dismounted armoured infantry in assault boats belonging to the engineers crossed the river and established a bridgehead. Phase 3 saw the engineers preparing the crossing point with a Pionierpanzer 2 Dachs armoured engineer vehicle. Then two Panzerschnellbrücke Biber armoured bridge layers launched their tank bridges one after the other in an overlapping way. By doing so the vehicles could establish an MLC 50 bridge with a usable length of up to 45m.

With the bridge now in place, Schützenpanzer Puma armoured infantry fighting vehicles crossed the river Naab and continued to attack in direction of Objective 1. However, due to the fact that the Leopard 2A6 main battle tanks weights 60.5 tons they were not able to follow. Therefore in Phase 4 a Faltfestbrücke general support bridge was built by the engineers over the river, which took about 90 minutes. With the bridge completed the Leopard 2A6 main battle tanks now crossed the Naab to join the Schützenpanzer Pumas, which ended the demonstration.