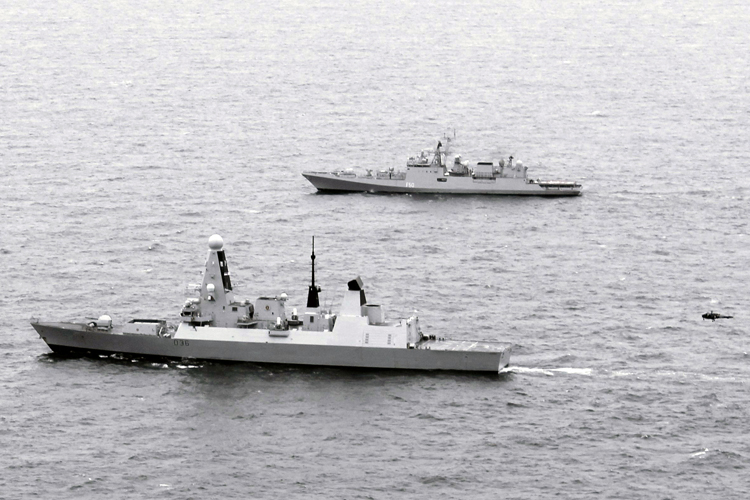 Exercise KONKAN – Royal Navy Destroyer HMS Defender joined forces with the Indian Navy in the English Channel as she commenced her Asia-Pacific deployment.

KONKAN is a long-running exercise designed to test the ability of the two Commonwealth navies to operate side-by-side if it comes to the crunch. It typically takes place off the namesake stretch of coastline in India – running for 450 miles along the Western Seaboard and encompassing Mumbai and Goa – as the Royal Navy maintains a regular presence in the Indian Ocean. But when Delhi dispatches its ships on deployments to western Europe, Britain hosts the exercises on its home turf. And so on the eve of the 72nd anniversary of Indian independence, Defender – which only left Portsmouth on Monday at the beginning of a mission to the Pacific Rim – linked up with ‘stealth frigate’ INS Tarkash in conditions more British, than Indian summer.

The two ships’ helicopters – a Wildcat from Defender, a Helix from the Tarkash – traded places on the respective flight decks, while Indian and British personnel were also encouraged to step into each other’s shoes, with a select few spending several hours experiencing life in a different navy. “It was interesting to see how culturally different the ship was, but also lots of similarities to our own ship,” said communications specialist Engineering Technician Angus Lawrence.

Both vessels are regarded as ‘stealth’ ships – designed to make the minimum impact on a foe’s radar display – with Defender specifically designed to shield a task group from air attack, while the Russian-built Tarkash is a general-purpose frigate bristling with anti-ship/anti-land/anti-air missiles.

“It is these regular engagements and opportunities to train with other navies that prove our capability to deliver on operations alongside our allies,” said Defender’s Commanding Officer Commander Richard Hewitt.