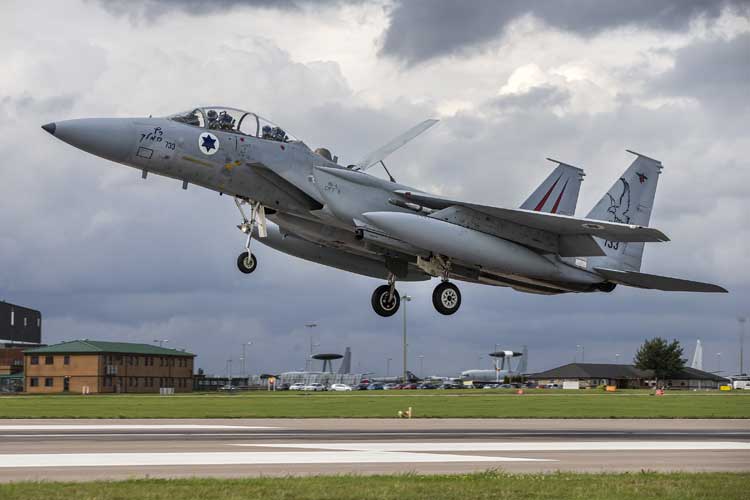 Aircraft from the German, Italian and Israeli Air Forces have arrived at RAF Waddington to participate in Exercise COBRA WARRIOR.

RAF Press Release 28 August 2019 (images updated 29 August): Aircraft from the German, Italian and Israeli Air Forces have arrived at RAF Waddington to participate in Exercise COBRA WARRIOR. They will join aircraft from the Royal Air Force and United States Air Force in high intensity large force tactical training over the coming weeks. Around 50 aircraft of various types will be participating in the exercise. The exercise will take place from the 1-20 September and will be controlled by directing staff at RAF Waddington.

The Exercise Director, Group Captain Robert Barrett said: “The RAF welcomes the participation of our Air Force colleagues from other nations and we welcome the opportunity to train alongside all of the participating nations’ forces on this challenging exercise.”

Colonel Urbano Floreani, the 4th Wing Commander, from the Italian Air Force said: “We are honoured to participate again in this very demanding and well organised international exercise. It will be a chance to fly with a selection of the best Weapon Instructors of the participating countries. Sharing our experiences will mutually increase our capabilities.”

The exercise develops the tactical leadership skills of aircrew and supporting elements within a complex air environment. Personnel develop, plan and practice tactics, techniques and procedures in challenging scenarios against a near peer adversary.

This will be the first time the Israeli Air Force have flown fast jets on exercise in UK airspace.