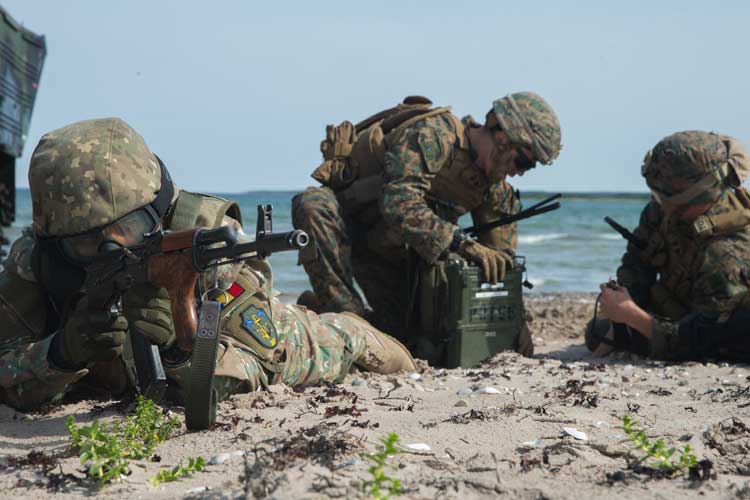 Estonia, 12 June, US Marines with 22nd MEU and Romanian Marines with 307 Regiment secure a beach after disembarking from the Polish landing ship ORP Gniezno during BALTOPS 2019 [USMC: Cpl. Abrey Liggins]

Romanian, Spanish and US Marines storm a beach in Estonia as part of BALTOPS 2019, a multinational amphibious exercise held in the Baltic Sea region.

A combined force of Romanian, Spanish and US Marines landed in Estonia as part of BALTOPS 2019, a US-led exercise intended to strengthen maritime interoperability across the Alliance. Involving 16 Allies and two partner nations, this annual exercise features amphibious operations in Estonia, Latvia and Lithuania, giving participants a chance to share tactics and practise the complicated art of deploying land forces from the sea.

Shots in this NATO video include Romanian, Spanish and US Marines conducting a beach landing, Polish amphibious tracked vehicles disembarking Polish Navy ship ORP Gniezno plus soundbites from a US Marine infantry captain and a Spanish Marine.