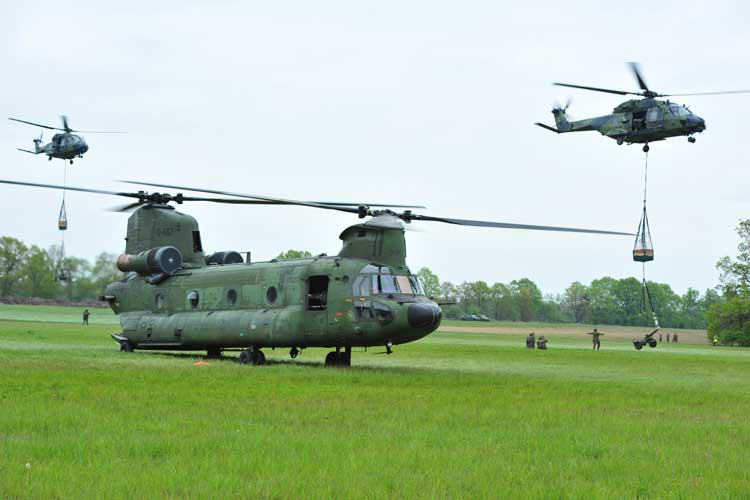 Also assigned to the Division Schnelle Kräfte (Rapid Forces Division) or DSK is the 11 Luchtmobiele Brigade of the Netherlands Koniklijke Landmacht. Currently, as part of Exercise GREEN GRIFFIN, Dutch and German troops of the DSK are training to execute airborne and air assault operations within a NATO Article 5 Scenario in Lower Saxony.

The first week of the exercise saw the troops going through a Capability Evaluation Training/Forces Integration Training (CET/FIT) phase. As part of this, the infantry assets were put through basic helicopter training in order to familiarise them with each other’s aircraft – the national ‘cross load’ procedures were one of the main goals. They also conducted a number of air assault raids in the vicinity of Nienburg and on the Bergen-Hohne Training Area.

The CET/FIT phase was followed by a Combat phase, during which the AMTF conducted two major operations, employing air assault tactics. As part of these operations, the force had to seize several bridges over the Elbe-Seitenkanal Canal, defended by enemy forces, using air assault tactics. The operations were conducted in order to deny an advancing major enemy force the ability to use the bridges. As part of the air assault operations hundreds of troops with their equipment and vehicles were inserted by transport helicopter. From the helicopter landing zones, they then closed in on the canal bridges and secured them. In some cases this involved heavy fighting.