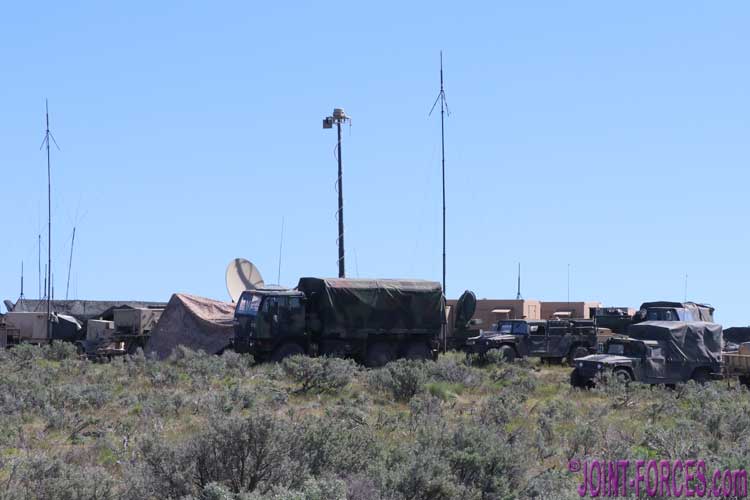 JWA 19 is the US Army’s largest annual joint-multinational live exercise in which the US military and partner nations assess future warfighting concepts, capabilities and formations in a large-scale and realistic battlefield exercise.

The Command & Control side of the exercise was held at Joint Base Lewis-McChord, south of Seattle, and the Battlefield phase was conducted at Yakima Training Center, some three hours by road over the Cascade Mountains to the east. A prior booking with the Estonian Defence Forces and the NATO eFP multinational battle groups near the north-eastern edge of Alliance territory, on Exercise KEVADTORM 19 on conflicting dates, limited our time on JWA to just one day in the field covering the initial Media Briefings ahead of the Distinguished Visitors Day later in the week. However, such was the importance of this exercise that we decided the short-duration long-distance trip would be well worth it.

Our host for the day, US Army Brigadier General Johnny K. Davis, the Commanding General for the Joint Modernization Command, had previously stated: “JWA 19 is the Army future and modernisation training ground. When we peer into future operational environments and consider our capabilities within that environment, we need an avenue to assess and evaluate our capabilities. That’s where JWA 19 comes in.”

The large-scale battlefield exercises at JWA 19 were tracked and heavily influenced by computer simulators. US Army Lieutenant Colonel James Teters, Chief of the Multi-Domain Simulations Center, stated of the exercise: “Strategies, tactics and operations employed in the field during JWA 19 are replicated in the simulators. We are able to take a snapshot of our fighting strength before and after battlefield movements and simulations. This will help our forces better understand and consider potential outcomes on the battlefield.”

To enable this a total of 12,200 troops were deployed, including a battle group from the 2nd Brigade of the 2nd Infantry Division (2-2 Stryker Brigade Combat Team) and a large OpFor (Opposition Forces) contingent on Exercise BAYONET FOCUS 2019 at Yakima TC, plus a Multinational Task Organisation was stepped up back at Joint Base Lewis-McChord (JBLM).

The Multinational Task Organisation key units included: CJTF (Combined Joint Task Force) COURAGE, drawn from 1st US Corps; a CFLCC (Coalition Forces Land Component Command) from US 7th Infantry Division; a CFACC (Coalition Forces Air Component Command) from the US Air Force; a CFMCC (Coalition Forces Maritime Component Command) from the US Navy; an SOJTF (Special Operations Joint Task Force) from the US Army Spec Ops Command; elements of 3rd Australian Combined Arms Command; elements of 2nd Canadian Mechanised Brigade Group; elements of 1st UK Armoured Infantry Strike Brigade; and elements of the New Zealand Infantry Battle Group. Just prior to our departure, MoD Whitehall confirmed to us that around 200 personnel from HQ 1 Armoured Infantry Brigade were deployed to act as a Strike Brigade for the exercise, of which total roughly 75 were Headquarters staff, 50 were LOCON (Lower Control) personnel and 50 were Signallers; unfortunately our hectic schedule prevented us accepting the offer from US Public Affairs of a visit to the British contingent at JBLM the day after the Yakima briefings.

On the future modernisation side, looking forward to both friendly and potential adversary Capabilities circa 2025-2028, three primary Concepts – Robotic Complex Breaching, the Sensor-Enabled Scout Platoon, and Tactical Power Management – were the main focus of the units out on the ground at Yakima and we will take a closer look at these in the next part.