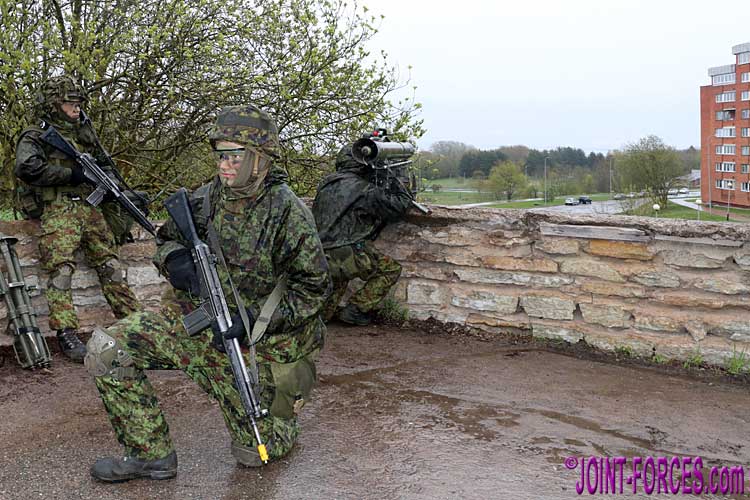 Overnight on Monday the Yellow Force battle group in the Sirgala area of Eastern Estonia rolled back Blue Force, who consolidated in the town of Sillamäe, reports Bob Morrison.

The Estonian Defence Force infantry brigade deployed in Sillamäe on Tuesday 7th May put up a stout defence, but sheer weight of numbers on the Opposing Forces side relentlessly forced them back westwards. We moved forwards through the town with Yellow Forces throughout Tuesday morning before relocating to the vicinity of Jõhvi to catch British (Blue Force) Wildcat helicopters flying NATO eFP Battle Group troops forward to bolster the defence and Royal Artillery Stormer HVM close air defence vehicles protecting their FARP (Forward Armour and Refuelling Point) and the Battle Group HQ. Hopefully the accompanying images will give readers a brief feel for the action and we will update with a proper feature once KEVADTORM 2019 is well and truly over.

Footnote: KEVADTORM is used to exercise and validate both of Estonia’s Infantry Brigades, so Estonian troops participate in both Blue and Yellow Forces with only yellow tapes differentiating. Two of NATO’s eFP Battle Groups are deployed in support of both Yellow and Blue ~ we will explain in more detail in a future feature.