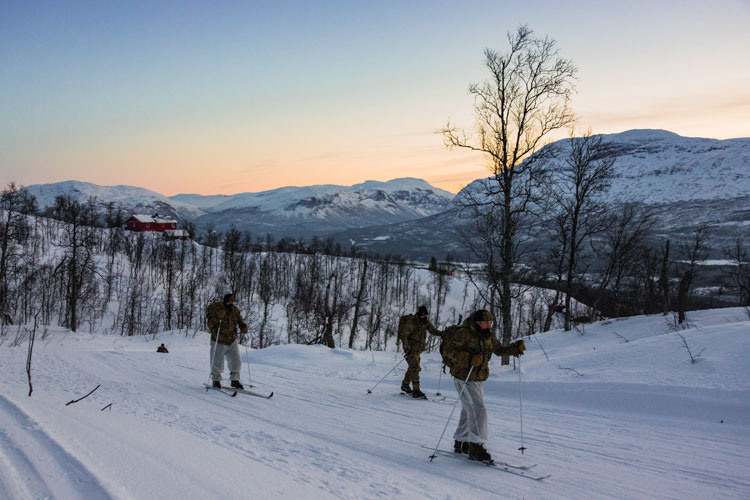 The Royal Navy yesterday announced that Royal Marines have arrived in the High North for their first test on the UK’s new mission to defend the Arctic.

Press Release, 06 February 2019: The elite Commandos are training hundreds of miles inside the Arctic Circle for the next two months, honing their survival and combat skills in temperatures as low as -30°C alongside NATO allies. The Royal Marines – the Naval Service’s amphibious light infantry and the UK’s cold weather warfare experts – have operated in this region for half a century and are spearheading Britain’s strategy to defend the Arctic. Minister of Defence Gavin Williamson underlined the UK’s ongoing commitment to the Arctic in September, putting the area central to the security of the United Kingdom.

“As the UK’s specialists in extreme cold weather warfare, Commando Forces, led by 40 Commando Royal Marines, are currently operating above the Arctic Circle to maintain and develop our warfighting skills in one of the world’s most extreme environments,” said Lieutenant Colonel Paul Maynard, Officer Commanding of 40 Commando. “Working closely with our NATO allies, we are directly supporting the UK MOD’s new Arctic Strategy to provide regional reassurance and deter against aggression.”

The Commandos are building on strong partnerships with the US Marines Corps by delivering the Cold Weather Warfare course – run by the Royal Marines Mountain Leader Cadre – to 240 American personnel. The winter deployment will culminate with a show of firepower in war games alongside USMC and the Norwegian army, pitting their wits against NATO partner nations, Sweden and Finland. The annual deployment to the region is designed to keep the green berets fresh and ready for combat in mountain and cold weather warfare, as well as passing on wisdom to allies and the new generation of Royal Marines.

The opening weeks of the exercise have seen Commandos focus on survival out in the wilderness around the fjords and mountains near Bardufoss, Norway. They are honing skills in shelter construction, travelling huge distances on skis and navigating by the stars alone.

“For me the course has been very good, it is a really beautiful place in the world to be working, somewhere where I wouldn’t have the opportunity to come if I hadn’t joined the Royal Marines,” said Lance Corporal Sean Johns of 40 Commando, normally based at Norton Manor near Taunton. “Obviously, the temperature is something you’re fighting against, but we have all the best kit, equipment and attitude to deal with it.”

The first week ended with the infamous ‘ice-breaking’ drill; the Royal Marines drop into the bracing water through a hole cut in ice on a frozen lake, then scramble out with their ski poles. Over the coming weeks the Commandos will see further distances covered on skis with heavier weight, whilst enhancing their soldiering. After the cold weather training, the Royal Marines will start preparing for war games in Sweden next month.