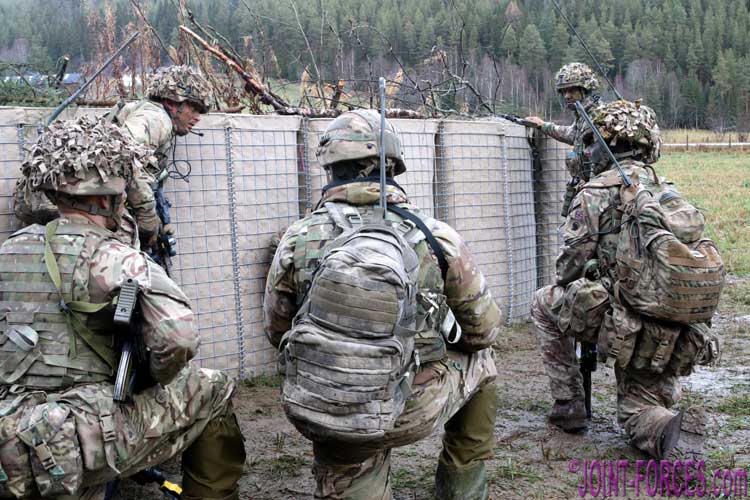 At first light today, D+3, the North (Red) Force continued its relentless advance from Tynset towards Bergset but they were in for a nasty surprise, writes Bob Morrison.

Since yesterday evening, Carl Schulze and myself have divided our resources with him heading 150km north to cover the surprise South (Blue) Force amphibious landing and me heading south-east to cover the key river bridge at Elvål, just outside Bergset, where the commander of the British-led 4 MNB (Multi-National Brigade) had decided to put a stop to North Force on the centremost North-South axis. TRIDENT JUNCTURE 2018 (TRJE18) is not only the largest NATO exercise since the Cold War, but it also covers a vast area as 50,000+ soldiers, sailors and airmen manoeuvre across much of mid-Norway plus the air and sea to the north.

Using my cloak of invisibility (a TRJE18 Media Pass) I passed through the advancing North Force armour and reached the bridge over the River Tysla just after it had been blown to prevent the enemy crossing and attacking Bergset. Behind the lead tanks and accompanying Armoured Infantry Fighting Vehicles, armoured engineers were bringing forward Leguan bridge-layers to create a new crossing… but they had not reckoned on running into South (Blue) Force Danish Leopard 2 tanks supporting British Light Role Infantry and Norwegian Home Guard in prepared positions.

JOINT-FORCES.com joined Anzio Company of 1 LANCS (1st Battalion, The Duke of Lancaster’s Regiment) in the trenches to the west of the bridge on the south bank of the Tysla just before North Force attacked, and we stayed with them until the end of the engagement. To the east of the bridge, a company from 1 R IRISH (1st Battalion of the Royal Irish Regiment) with a Danish Leopard MBT in support guarded the northern arc and behind them a Norwegian Home Guard unit formed the third defensive position. A Polish mechanised infantry company with T-72 main battle tanks and BVP armoured infantry carriers stood by in reserve.

By the time this snapping scribbler left, in mid-afternoon just as the first snowflakes started to fall and before the road back to Tynset became impassible to two-wheel drive cars, the North Force had been successfully blocked and the action had almost petered out. We suspect this could be the turning point in what up until now has looked like a one-sided battle as the South (Blue) Forces have all consolidated and appear ready to commence a counter-attack over the next 12 to 36 hours. These 1 R IRISH LPPVs were driven 2,500km across Europe to participate on TRJE18 [© BM]