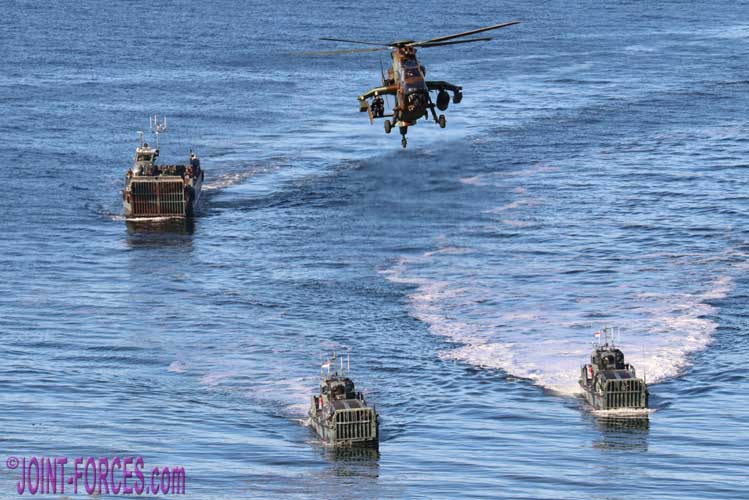 Prior to commencement of the LIVEX phase of Exercise TRIDENT JUNCTURE 2018 (TRJE18) the NATO Alliance and Partners nations today laid on a Distinguished Visitors Day, writes Bob Morrison.

This spectacular event, which was a miniature version of the South (Blue) Forces amphibious landing scheduled for later this week, involved the full gambit of Air, Land and Sea assets ranging from combat fixed and rotary wing aircraft, Marines and armour and amphibious ships and landing craft. Almost every NATO member nation plus Finland and Sweden contributed personnel and materiel to the display, which lasted almost exactly an hour.

Both Carl and myself were on hand to document this unparalleled show of strength and technology, which saw both Combined and Joint Forces working closely together over, on and beside a Norwegian fjord a little to the west of Trondheim. The accompanying photos will hopefully give you a tiny flavour of the event, which we will take a detailed look back at once the exercise is over.

Around dawn tomorrow, 31st October, all troops should be in position in the exercise box and D-Day will be officially declared with battle commencing well south and east of today’s action. Watch this space for updates as and when there is a lull in the action over the next eight days.