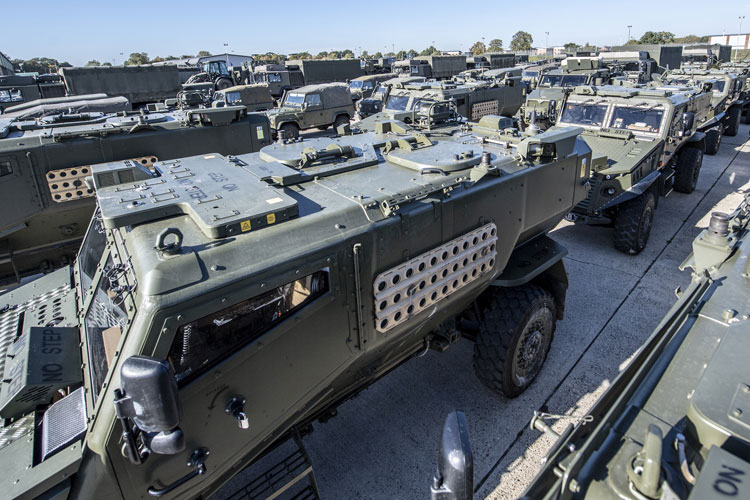 Hundreds of UK troops have arrived in the Netherlands today as part of an epic 2,500km road move to Norway for Exercise TRIDENT JUNCTURE, NATO’s flagship exercise in 2018.

UK MoD News Release, 10 October 2018: In Norway, UK Armed Forces personnel will contribute to the large-scale and complex exercise which will test NATO’s most important founding principle of collective defence in an Article 5 scenario – when an attack on one is an attack on all. With some 150 aircraft, 40,000 participants and 10,000 vehicles, this is the largest collective defence exercise NATO has seen in over a decade.

Defence Secretary Gavin Williamson said: “NATO is the bedrock of defence where Britain plays a leading role. Whenever the call comes, the UK is foremost in stepping up to support our friends and allies across the globe.

“This exercise demonstrates the strength of our collective defence. Together we are ready to tackle any threat, from any direction.”

Earlier this week British Army vehicles and equipment were loaded onto Channel Tunnel trains before arriving in The Netherlands today as part of the complex logistical task of transporting a Battlegroup to Norway – a journey that includes road, rail and ferry.

Members of the Royal Logistics Corps are lending their expertise in support of the road move while in Norway soldiers from the Royal Irish Regiment, the Duke of Lancaster’s Regiment and supporting units will train together with NATO allies. Footnote: JOINT-FORCES.com was yesterday (Tues 9th) accredited by Norway’s Forvarsnet and today we firmed up our initial plans to provide widespread coverage of NATO’s largest defensive exercise since the Cold War. We were also invited by 4th [UK] Infantry Brigade to meet up with the road convoy at the mid-point of its 2,500km road move, when they stop for twelve or so hours to catch up on sleep and have a hot breakfast, but as we plan to cover them in the field during the LIVEX phase of TRJE18 we decided to leave the guys to their well-deserved break.