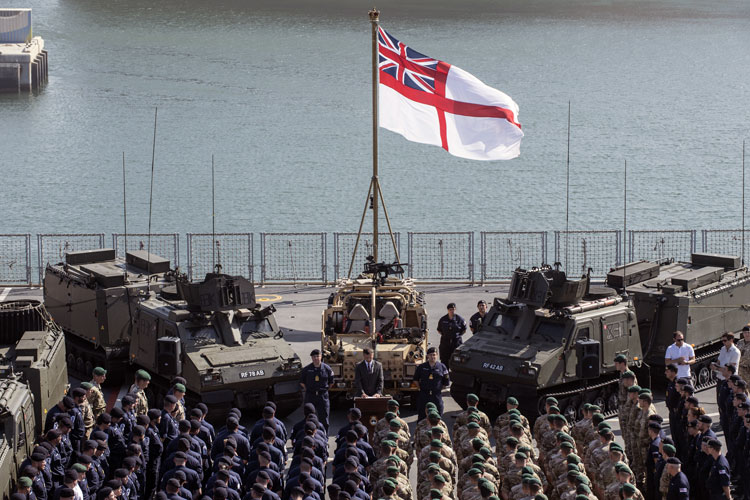 As part of a five-day visit to the Gulf Region, Defence Minister Mark Lancaster has officially opened the UK-Oman joint exercise SAIF SAREEA 3 in the Sultanate of Oman.

Defence Minister Mark Lancaster said: “The security of the Gulf is of the utmost importance to not only regional stability, but to the world’s economic stability.

“Our commitment to our international responsibilities in the region is unwavering. SAIF SAREEA is far more than just a bilateral military exercise, it is a demonstration of our commitment and will leave behind a legacy for decades to come.”

The official opening of Exercise SAIF SAREEA 3 signals the start of the UK’s largest military exercise in 17 years, which will see over 5,500 UK troops train alongside Omani counterparts. It is the largest and the most complex of a series of events which will see the UK Armed Forces work with every single one of our Gulf partner nations in a combination of engagements on land, sea, and in the air over the coming months.

Mark Lancaster also visited Duqm port, opening the Joint Logistics Support Base, which will support UK forces operating and exercising in Oman and the region, including Queen Elizabeth Class carrier operations from 2021.

Editor’s Comment: Although Exercise SAIF SAREEA (SWIFT SWORD) 3 is a mere shadow of its predecessor, SAIF SAREEA II held in 2001, and it involves just 5,500 personnel from all three services and only eight Challenger 2 tanks compared to 22,000 pax and 66 MBTs last time around, JOINT-FORCES.com has been very keen to provide independent coverage.

If the rumour mill is to be believed, this will be the first overseas field exercise in which female crew members of the Royal Tank Regiment (founded 101 years ago as the world’s first tank regiment) will participate and it may be the last major overseas exercise on which 1 Squadron RAF Regiment (founded in the Middle East 97 years ago as an armoured car squadron) will operate with Light Protected Patrol Vehicles in the ground defence role.

Both stories, and the no doubt many others we could bring back, would have been of interest to our readers but regrettably, despite us formally indicating our interest in mid-July, the only opportunity we might be offered across this two month deployment appears to be a three-day period which coincides exactly with the height of the TRIDENT JUNCTURE LIVEX phase (the dates of which all parties have been aware of since early summer) in Norway.

Naturally, especially as we would wish to cover the SAIF SAREEA exercise itself and not the brief ministerial visits, we did not expect Whitehall to fund our travel out to the Gulf Region and knowing how tight the defence budget purse strings are we were more than happy to fund our own way out to Muscat or Salalah – but unfortunately the window of opportunity to do this is now rapidly closing.

It is therefore looks like we will be unable to provide the sort of independent coverage of this interesting exercise which we know most regular readers will be expecting to see. Sorry everybody – it’s out of our hands.

exercise, Featured, Oman, SAIF SAREEA
You may also like