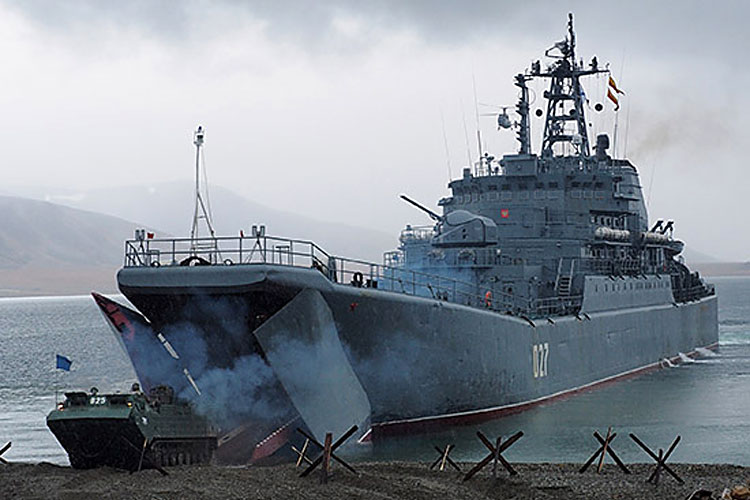 The major exercises in Eastern Russian have continued with Arctic units holding amphibious assault training manoeuvres on the Chukotka coast.

Press Release: An Arctic grouping of the Northern Fleet operating in the Bering Sea, led by the Commander of the Kola Flotilla, Vice Admiral Oleg Golubev, a bilateral tactical amphibious exercise was conducted at the coast near the port of Egvekinot.

Before the start of the amphibious operation, the combat ships of the Arctic group fulfilled the tasks of suppressing the firing points of the mock enemy on the shore. The major anti-submarine ship Vice Admiral Kulakov and AK-725 large amphibious ships Kondopoga and Alexander Otrarovskiy carried out artillery firing at targets. The crew of the Ka-27 shipborne helicopter of the major ASW ship Vice Admiral Kulakov delivered an air strike and landed an air assault behind the enemy lines.

After the fire training,the main forces landed from the vessels Kondopoga and Alexander Ozerkovskiy. Marines on BTR-80 armoured personnel carriers have practised combat tactics of amphibious assault on an unequipped shore.