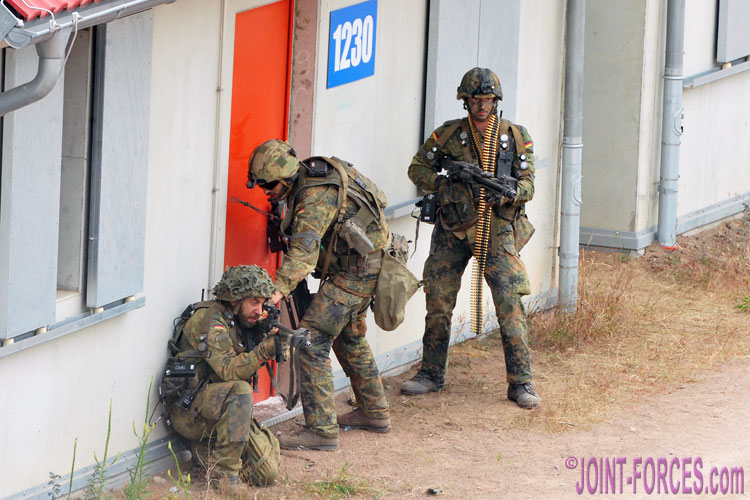 Between the 10th and 19th of June the brigade’s Panzerlehr bataillon 93 combined arms battle group was put through its Combat Readiness Evaluation (CREVAL) by NATO at the Gefechts übungs zentrum des Heeres (Army combat manoeuvre training centre) or GÜZ on the Altmark Training Area.

Exercising on the training area under command of the headquarters of Panzerlehr brigade 9, the Panzerlehr bataillon 93 combined arms battle group was one of the last formations of the earmarked 2019 VJTF(L) assets to pass CREVAL. As part of this evaluation the formation had to undertake defensive, offensive and delaying actions, which it performed with outstanding results, gaining the combat ready status at the end of the exercise.

The German troops were joined on the exercise by elements of the Norwegian Telemark Battalion and the Dutch 45 Pantser infanterie bataljon Oranje Gelderland. Both foreign units will provide battle groups under command of the Panzerlehr brigade 9 as part of VJTF(L) 2019.

The enemy for the VJTF(L) forces was provided by the Ausbildungsverband, which is the GÜZ training centre’s own opposing force (OpFor). As part of the training the troops were among the first to use the centre’s brand new Schnöggersburg MOUT (Military Operations in Urban Terrain) training site, Germany’s equivalent of France’s CENZUB or Britain’s very much smaller Copehill Down, situated in the north of the Altmark Training Area.

The MELLS anti-tank guided missile system, a version of Spike LR, has recently been integrated with the Schützenpanzer Marder 1A3 AIFV [© CS]

So far only partialy handed over to the German Army, when fully operational in the future Schnöggersburg complex will allow troops to train for urban operations in a full-size village featuring more than 500 buildings of different sizes, ranging up to multi-storey housing, and including a place of worship and mayoral or council buildings.

Running through the combat village there will also be an 800 metre stretch of river with several bridges that can be removed, a station with 1.5 kilometres of railway tracks, a suburb containing containerised housing, an airfield with a runway, hundreds of metres of usable sewer system, an underground station with tunnels and much more.