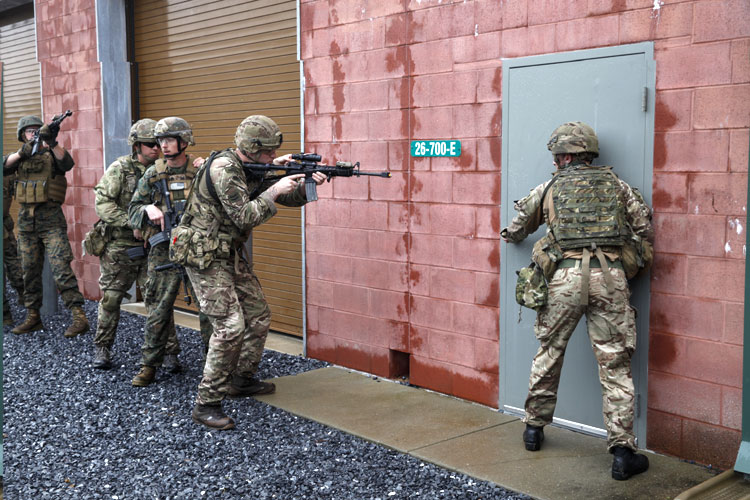 The [US] Reserve Marines supporting this fifth iteration of training are based out of five locations: Portland, Oregon, Battle Creek, Michigan, Peoria, Illinois, Folsom, Pennsylvania, and Millington, Tennessee.

“Every year we alternate where the integrated training between the Marines and commandos will take place,” said Maj. Timothy B. McGovney, company commander of Exercise RED DAGGER, 6th ESB. “This year happens to be at Fort Indiantown Gap.”

Fort Indiantown Gap is an ideal training environment as it provides the Marines and British Commandos a perfect area to enhance their skills. “We are really looking forward to making the most out of the facilities the Marines have here in the United States and particularly the built up urban environment on Fort Indiantown Gap,” said 2nd Lt. David A. Grant, support troop commander, 131 Commando Squadron Royal Engineers. “It is quite rare compared to what we have in the UK.”

The Marines and British Commandos have plans to conduct combat pistol training, offensive and defensive military operations on urbanised terrain, or MOUT, and a series of vertical and horizontal engineering and welding projects.

The first half of the two week exercise will consist of a series of ranges and tactical instruction. “We will be teaching rifle marksmanship with the M16s, M4s, and M9s,” said McGovney. “Tables five and six, which are short range engagements, will be conducted both during the day and then again at night with the night operations and night vision goggles.”

US Marines and and British Commandos working as a squad practice clearing a building on a bilateral training exercise in Pennsylvania [USMC: Sgt. Melanie Wolf]

Even though the troops do not share the same procedures, equipment, and tactics, they are able to build off of each other’s knowledge and gain respect for each other’s strengths. “We try to learn the commando’s infantry tactics, their terminology and lingo on how they do things,” said McGovney. “Even though they haven’t used our weapons systems, we are learning exactly how they would hold their own weapons, what conditions they may use with their weapons, and how they maintain dispersion in a tactical environment with the gear and equipment they have.”

Half of the training that will be conducted will give the engineers and metal workers a chance to do something within the realm of their occupational speciality. “The second half of this exercise is the engineering projects, where we will be putting up vertical siding construction pieces and installing new flooring in an old World War II barracks,” said McGovney. “We also have plans for our heavy equipment operators to dig trenches at a local range, in order to practice survivability positions within a tactical environment.

The British Commandos are more than ready to continue this interoperability between the Marines and look forward to learning how to use the Marines weapons, equipment, and tactics. “This exercise will be a big skill exchange,” said Grant. “It will create a wider appreciation of what each individual unit does, and enhance our skills that have faded.”

With a hopeful outcome for this exercise and future iterations, the Marines with 6th ESB hit the ground running and kick off the integrated training with the British Commandos. “These are our allies across the Atlantic and we want to be able to go into theatre with them and be able to operate, whether adjacently, joint, or bilaterally,” said McGovney. It’s important to continue this integrated training in order to shoot, move, and communicate together. Both nations have different capabilities and equipment that we can bring to the table to accomplish the same mission.” A US Marine sergeant range coach gives the all clear sign for the firing line of integrated Marines and British Commandos during Exercise RED DAGGER, May 14th [USMC: Sgt. Melanie Wolf]