EAGER LION 18 ~ US Marines In Jordan 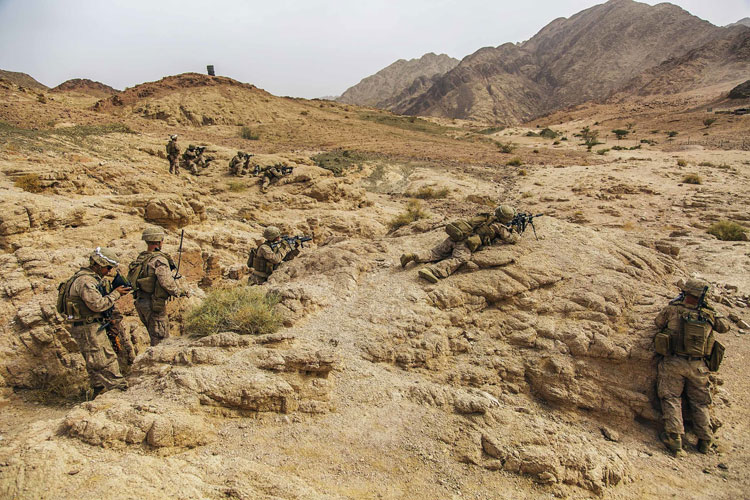 Over the last week a Battalion Landing Team from 26th Marine Expeditionary Unit USMC has been deployed on manoeuvres in Jordan on Exercise EAGER LION 18.

After landing at the head of the Gulf of Aqaba, at the northern end of the Red Sea, the US Marines from BLT 2/6 moved 50km inland to the Al Quwayrah ranges for a live fire package alongside Jordanian Armed Forces. These vast training ranges are well known to UK Forces who have deployed on past SHAMAL STORM exercises.

EAGER LION is billed as a capstone training engagement that provides US forces and the Jordan Armed Forces an opportunity to rehearse operating in a coalition environment and to pursue new ways to collectively address threats to regional security and improve overall maritime security. BLT2/6, i.e. Battalion Landing Team, 2nd Battalion, 6th Marine Regiment, is a primary component of 26th Marine Expeditionary Unit.

US Marines from the Maritime Raid Force, 26 MEU, brace while breaching an entrance into the Method Of Entry building at KASOTC [USMC: Cpl Jered T Stone]

US Marines assigned to BLT 2/6) keep a simulated civilian protest at a safe distance for the arrival of Marines at KASOTC for a NEO, April 20th [USMC: LCpl Tojyea G Matally]