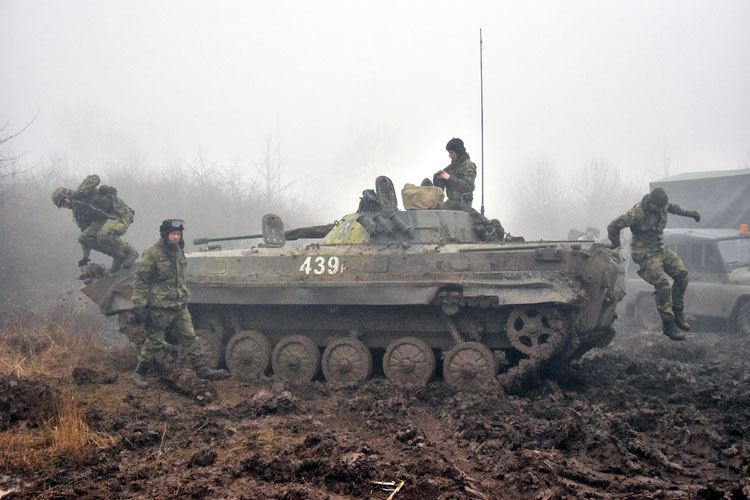 At various Czech training areas around the country, exercises to improve and strengthen allied cooperation and refine joint operational skills are being carried out over the next few weeks to prepare for the upcoming multi-national exercises.

Approximately 700 soldiers from the Czech 72nd Mechanised Battalion, based at Praslavice, the Slovak 11th Mechanised Battalion and Czech chemical specialists and support units were training in late March at the Hradiste military training base. They carried out joint tactical operations including live shooting with mortars and BMP-2 armoured fighting vehicles.

“We see each of these joint exercises as an excellent opportunity to get to know each other better, to understand and learn about the various approaches of the different teams in reaching a common goal. At the same time, we are also preparing for the DUKLA SPIRIT exercise which will be held here this August,” said Deputy Commander of the 72nd battalion, Major Tomas Suchy.

Another series of exercises for the June deployment to Latvia as part of the Canadian-led NATO Enhanced Forward Presence (eFP) in the Baltics was completed at the Libava military area shooting range.

The members of the 71st Mechanized Battalion carried out their live-fire exercise using the 120mm mortar PRAM.

Newcomers at Strakonice were given their new duties

Over the course of one week, soldiers went through gunfire and hand grenade training by day and night. They took part in combat drills; testing their speed and reactions when facing and/or attacking an opponent.

They practiced field orientation and survival skills using limited resources, and honed their skills in providing first-aid treatment under combat and other adverse conditions.

“Becoming a professional soldier was my childhood dream,” said a twenty-six-year-old recent recruit. “I worked for seven years as a welder, but I would never have advanced further in this field, and I was also interested in pursuing a more physically active profession,” explained Sergeant Pavel Rejsek, one of seventy newcomers who began their military service at the 25th Air Defence Missile Regiment at Strakonice.