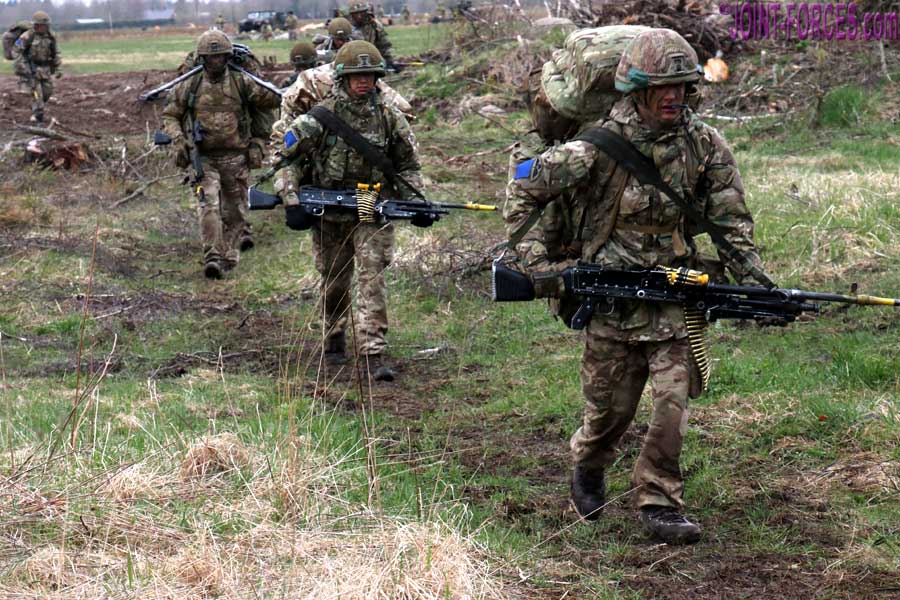 SWIFT RESPONSE 21 is now well underway in the Baltic with US and UK Paratroopers having consolidated on the DZ by daylight today, reports Bob Morrison.

As mentioned yesterday – see SWIFT RESPONSE 21 SitRep From Estonia – the initial airborne insertion by 3rd Brigade Combat Team of the US 82nd Airborne Division with B Company from 2nd Battalion of the UK Parachute Regiment was postponed by 24 hours due to high winds and dense low rain clouds over the Nurmsi Airfield Drop Zone (DZ) in Estonia. However around midnight on the night of 7/8th May the JEF (Joint Expeditionary Force) successfully parachuted in, along with a heavy drop element which included 105mm and 155mm howitzers in addition to supplies, and then overcame the OpFor (Opposing Force) defence occupying prepared positions in forest to the east of the Cold War era grass airstrip.

Realising after a Met check that light levels over the drop zone at midnight would most likely be insufficient for photography – even the highly skilled and very well equipped NATO Multimedia Team only managed a handful of usable still images during the night’s events – your humble scribe opted for a few hours kip before an 04:00 start to be on the Drop Zone around first light today. The battle with the defenders in the immediate vicinity was, of course, by then well over but I was able to photograph the Paras moving out to their first objective of the day before heading I headed off first to the gun line to snap the artillery and then on to focus on some of the logistics required to keep a brigade combat team sustained after parachuting in from the other side of the Atlantic.

Twelve hours after my arrival the main force of Paras, having mopped up all remaining traces of the OpFor and then taken turns to rest a little, returned to the DZ which had now become a PZ (Pickup Zone) as waves of Chinook and Black Hawk helicopters flew in from bases further west to fly forward the troops and equipment 60 kilometres to the north for the live-fire phase of the exercise.

Footnote: I hope to return to today’s activities in a little more depth in the not too distant future, as and when time permits.