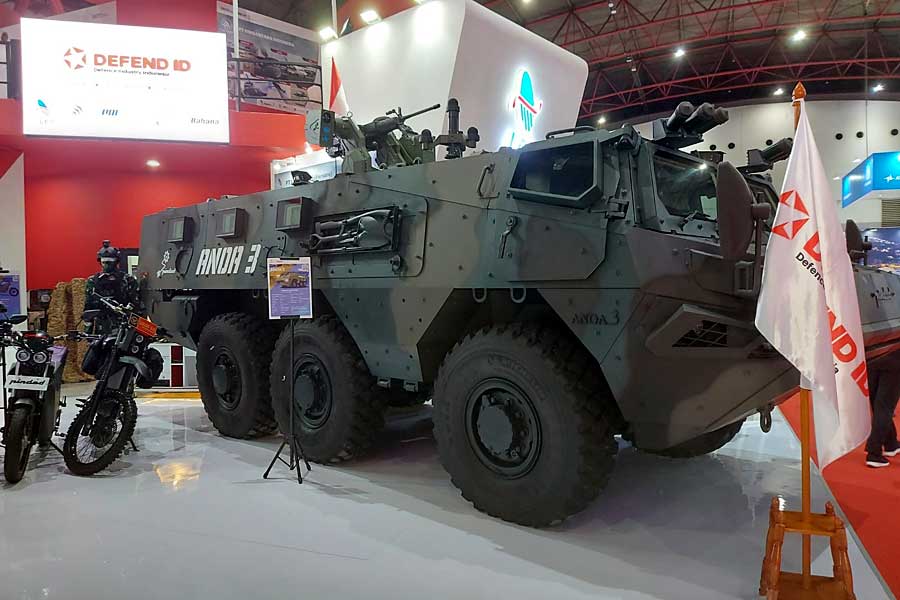 Press Release, Satory, 02 November 2022: French leader of military mobility solutions Arquus is exhibiting at Indodefence 2022, the first edition since 2018. Arquus is eager to renew its commitment to Indonesian defence and to strengthen its ties with major Indonesian Defence companies such as Arquus’ long-term partner PT Pindad.

On the occasion, Arquus is proud to present a VAB MK3 APC (Armoured Personnel Carrier) on Defend ID’s booth, under Arquus’ partner, state-owned company PT Pindad’s flag. The VAB MK3 is exhibited in a configuration specifically thought for Indonesia, with several adaptations conducted by PT Pindad: the ANOA 3.

That modern, well-protected and equipped APC showcases Arquus’ and PT Pindad’s joint cooperation to meet the needs of the Indonesian army and law enforcement units. Already in service and combat-proven in various armies around the world, the VAB MK3 is Arquus’ flagship on the 6×6 market. It is a modern, NATO-compliant vehicle that Arquus constantly upgrades to better answer the operational needs of the operators on the battlefield.

The VAB MK3 is a very agile and well protected vehicle, which can serve as an APC or an IFV (Infantry Fighting Vehicle) depending on the mission at hand. Its very compact architecture and low silhouette makes it a vehicle very well adapted to high-intensity conflicts against opponents equipped with multiple reconnaissance and aggression solutions. This concept proves once again its validity as modern combat vehicles tend to grow taller and bigger, which increases their visual signature on the battlefield.

Arquus also presents large-scale models for VAB MK3, Bastion and Fortress on its booth, to showcase its complete range of defence and security vehicles, as well as its ability to partner with companies on the long run. Such a cooperation can include vehicle design, production, support and upgrade during the whole life of the equipment to fully answer the evolution of the operational needs.

Arquus & PT Pindad – 15 Years Of Technical & Industrial Partnership: Arquus and PT Pindad have been running a long-term and successful relationship over the past 15 years. Throughout these years, Arquus has been supplying PT Pindad with major components and parts which have been integrated in Indonesian-made armoured vehicles. In the framework of that cooperation, Arquus has notably supplied powerpacks for ANOA 6×6 APC vehicles and BADAK 6×6 IFV, currently serving in the Indonesian Army. Arquus has also supplied rolling chassis for the KOMODO 4×4 multipurpose vehicle.

At Indodefence 2022, Arquus and PT Pindad renew their partnership, which has been running successfully for 15 years and has been recently completed by a Memorandum of Understanding (MoU) signed at Eurosatory 2022 in Paris to establish future collaboration in land systems for Indonesia. This MoU covers the development and production of new armoured vehicles, as well as corresponding systems and services. With this agreement, both companies agreed to turn an exemplary relationship into an official, and larger scale partnership.

The aim of this MoU is to cooperate in the field of military vehicles and systems to address the current needs of the Indonesian Armed Forces. Such cooperation will cover multi-purpose armoured vehicles, reconnaissance vehicles, APC and IFV, as well as remote-controlled weapon stations. It could also include development, product qualification, production and assembly, plus aftersales services.

On top of its long-running relationship with PT Pindad, and the hundreds of ANOA, BADAK and KOMODO armoured vehicles proudly serving daily, Arquus is a major supplier for the Indonesian Army. Arquus has indeed produced and delivered a total of 80 vehicles directly to the Ministry of Defence, including VAB, VBL and Sherpa Light vehicles in various configurations. That cooperation could go further in case of new needs, with 4×4 and 6×6 vehicles, both for Defence and Security needs, as well as corresponding services and systems, such as drivelines and mobility elements or RCWS (Remote-Controlled Weapon Stations) such as the Hornet range, already in service within the French Army. Arquus is looking forward to developing its relationship with Indonesia.