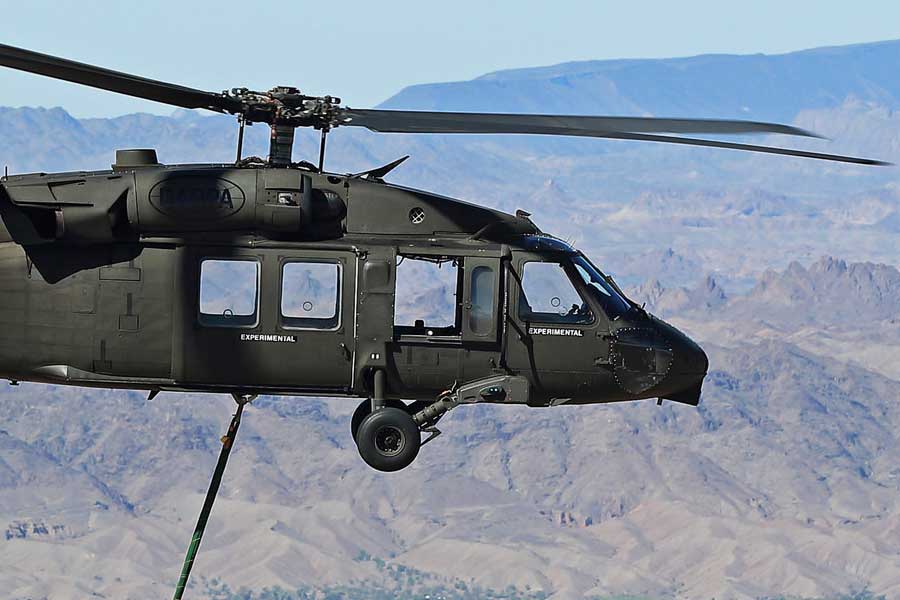 Sikorsky and DARPA’s Autonomous Black Hawk helicopter flies logistics and rescue missions without pilots on board over Yuma Proving Ground.

Press Release, Yuma Proving Ground, 02 November 2022: Sikorsky, a Lockheed Martin company, and the Defense Advanced Research Projects Agency (DARPA) have successfully demonstrated to the US Army for the first time how an uninhabited Black Hawk helicopter flying autonomously can safely and reliably perform internal and external cargo resupply missions, and a rescue operation.

Performed Oct. 12, 14 and 18 as part of the US Army’s Project Convergence 2022 (PC22) experiment, the flights show how existing and future piloted utility helicopters could one day fly complex missions in reduced crew or autonomous mode. This would give Army commanders and aviators greater flexibility in how and when aircraft and pilots are used, especially in limited visibility or contested environments.

Why It Matters: Sikorsky is partnered with DARPA to develop autonomy technology that will exponentially improve the flight safety and efficiency of rotary and fixed-wing aircraft. Sikorsky’s autonomy system, known as MATRIX technology, forms the core of DARPA’s ALIAS (Aircrew Labor In-cockpit Automation System) project.

The Yuma Details: During PC22 Technology Gateway, the Sikorsky and DARPA team showed how the optionally piloted Black Hawk helicopter with no humans on board can deliver a large quantity of blood product unharmed by flying low and fast above ground level using the terrain to mask its signature; resupply troops with an external load; and re-route mid-flight to evacuate a casualty.

To begin the flight demonstrations, pilots flew and landed the Black Hawk aircraft, then activated the MATRIX system to give full control to the flight computer. When the pilots exited, the helicopter autonomously completed the following mission demonstrations:

What’s Next:The PC22 demonstrations were the second set of uninhabited Black Hawk flights this year. Sikorsky and DARPA will continue to work toward the transition of this technology for military operations, such as aircrew support and operations, logistics and medical resupply, casualty evacuation, and commercial applications such as firefighting, cargo and urban air mobility.