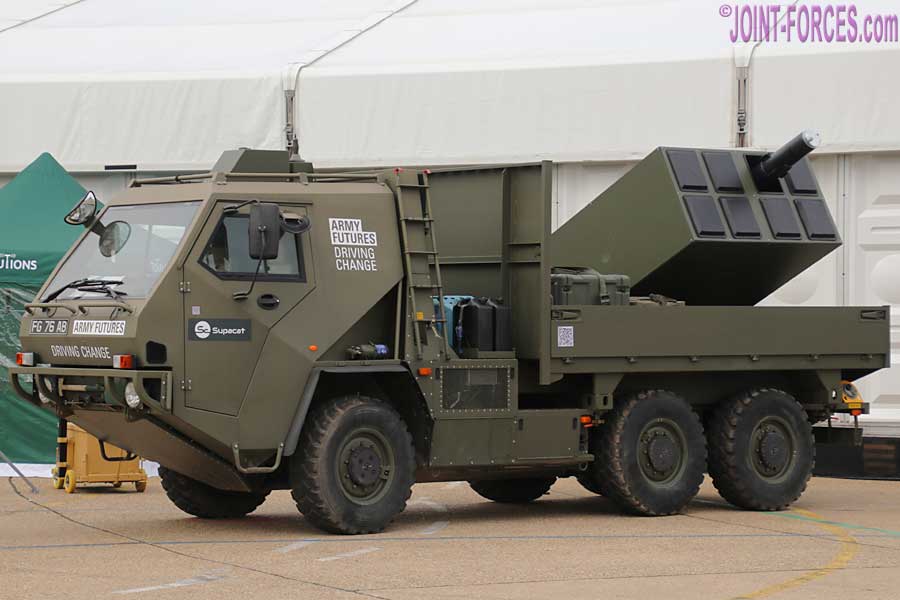 MBDA unveils its Land Precision Fires family including Brimstone on both RBSL Boxer 8×8 and Supacat HMT600 6×6 at DVD 2022.

MBDA’s ‘Land Precision Fires Family’ comprising Surface-Launched Brimstone and Land Precision Strike (LPS) are weapons that provide precision at layered ranges, operating 24/7 with low collateral effects across a wide range of operational scenarios, from peer conflict to a limited sub threshold operation. They will help commanders to win the deep fight and shape the close fight.

Mike Mew, UK Director Sales and Business Development: “The needs of the Army are clear and MBDA’s Future Portfolio, which contains the Land Precision Fires Family, can contribute to enabling CGS’s OP MOBILISE, accelerate Future Soldier, and meet key Land Industrial Strategy objectives. Working with the new Deep Recce Strike Brigade Combat Team is just one example of where MBDA is partnering with the Army to simplify and deliver precision-at-range complex weapons that are packed with the latest technology.”

Brimstone’s ‘one missile, multi-platform’ versatility is being showcased at DVD2022, including:-

Brimstone on Boxer: The Brimstone on Boxer concept being showcased at DVD has been created by both RBSL and MBDA in response to British Army’s need for a Mounted Close Combat Overwatch (MCCO) capability, as part of its future anti-armour needs known as Battle Group Organic Anti-Armour (BGOAA). Engaging quickly to deliver precision anti-armour effects at long ranges, the Brimstone on Boxer mission module provides the capability for Heavy Combat Teams to repel adversary formations and single targets. Rapidly providing an initial capability with current equipment and then spirally developing with broader battlefield integration is at the heart of this concept.

Brimstone on High Mobility Transporter HMT600 series: The Brimstone on HMT600concept has been created by both Supacat and MBDA to provide the Light Forces tactical commander with a similar and complementary organic Overwatch capability to rapidly deliver precision anti-armour effects at long ranges and in volume. Potentially integrating with in-service equipment such as the Forsberg Fused Target Locator (FTL) and MANTIS Battlefield Management System and also spirally developing over time.

Land Precision Strike: Land Precision Strike (LPS) responds to the emerging artillery need to defeat high-value targets in the deep battle; targets which may be relocatable and fleeting in nature. So achieving a disproportional operational effect on the adversary.

MBDA is working closely with MOD stakeholders on LPS weapon system concepts that will offer land commanders a step change in capability against armour at range – achieving highly discriminate, highly precise and low collateral effects for both peer and sub-peer conflicts. The plan is to be able to fire the LPS missile from a range of launchers including M270 MLRS, satisfying MoD’s ‘one platform, many weapons’ objective.