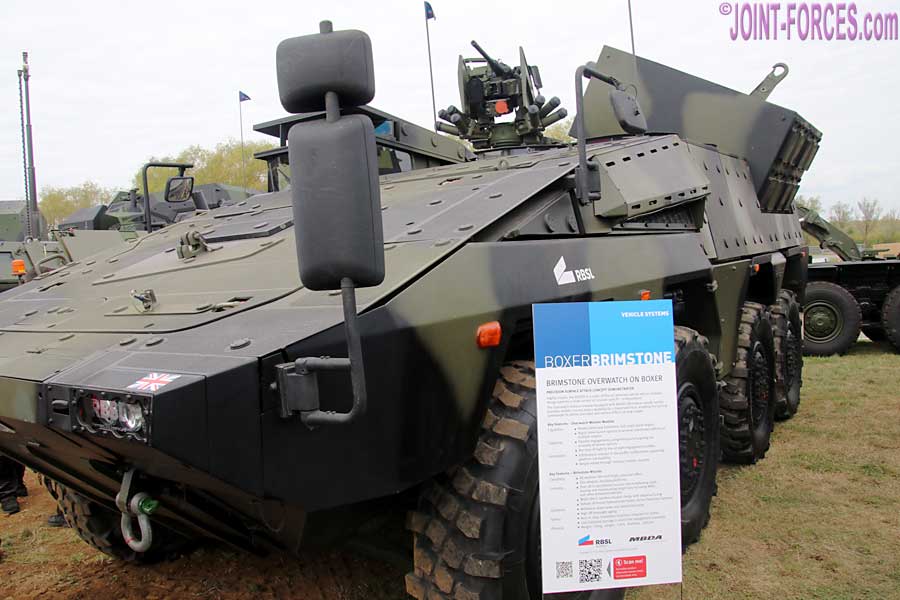 Press Release, Telford, 21 September 2022: RBSL has unveiled the Boxer Overwatch, a Brimstone missile-equipped variant of the Boxer vehicle developed in collaboration with MBDA.

Brimstone, leveraging significant investments by UK MOD into this state of the art anti-armour weapon system, offers ‘one missile, multi-platform’ versatility and is designed to be integrated onto land vehicles as well as helicopters, fixed-wing aircraft (including fast jets), naval platforms and UAVs. Brimstone’s non-line of sight (NLOS) capability, removes the need for the missile to be mounted on a turret and launched directly at a target. The integration by RBSL and MBDA provides next generation anti-armour coverage to the battle group.

Capitalising on the modularity of Boxer, a dedicated Boxer Overwatch provides the tactical commander with the capability to deliver precision anti-armour effects at long ranges. There is no modification to the Boxer drive module, no reduction in platform mobility and the low profile silhouette is key to survivability.

Colin McClean, Managing Director of RBSL, said: “Our collaboration with MBDA demonstrates UK land business working together to deliver as one team for the benefit both of the British Army and the UK Value proposition. As such it is one example of accelerating the realisation of Future Soldier and the recently published Land Industry Strategy.

“Furthermore it highlights once again the benefits of Boxer modularity and the platform’s excellent digital architecture to enable multiple mission systems to be integrated. I am very much looking forward to delivering this capability at pace to British soldiers.”

Chris Allam, Managing Director of MBDA UK, added: “This collaboration with RBSL is a great example of how we can partner to quickly provide the British Army with a UK sovereign capability that can be spirally developed further to meet the needs of Op MOBILISE and to advance Future Soldier.”