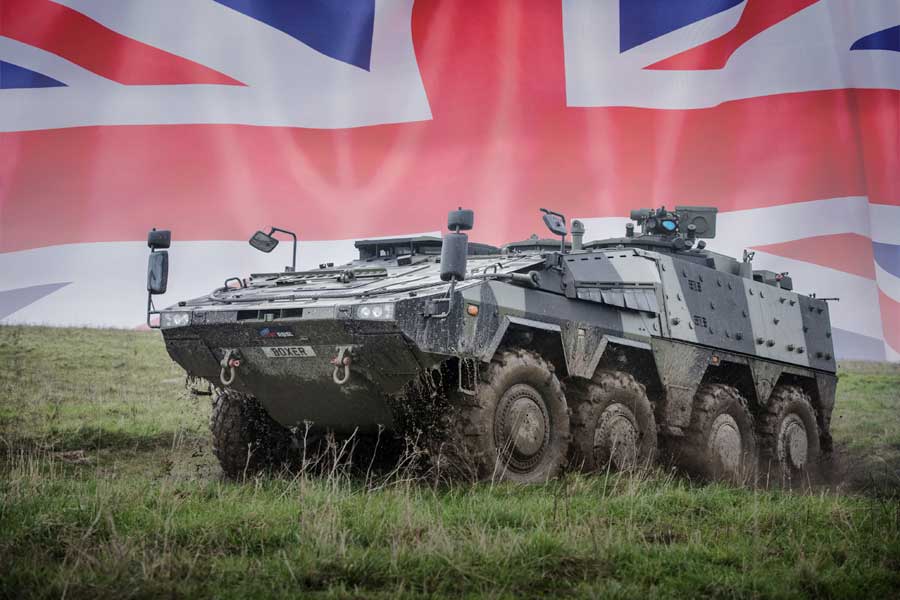 Rheinmetall and its joint venture company Rheinmetall BAE Systems Land (RBSL) will be present at the DVD 2022 trade fair in Millbrook.

Press Release, Düsseldorf, 21 September 2022: Rheinmetall and its joint venture company Rheinmetall BAE Systems Land (RBSL) will be present at the DVD trade fair in Millbrook, Bedfordshire on 21 and 22 September 2022. On the stand the companies will provide information on some of their extensive activities and products for the UK and export customers. These include key projects in the reshaping of His Majesty’s Armed Forces, such as delivery of Challenger 3 programme and Boxer vehicles for the Mechanised Infantry Vehicles (MIV) programmes and investing in future technology and long term support in the UK to create Sovereign Capability as promoted by the Land Industrial Strategy.

Boxer variants: Demonstrator Overwatch with MBDA Brimstone; Mortar Carrier; and Ground Based Air Defence ~ At DVD 2022, Rheinmetall and RBSL will be exhibiting several new Boxer variants and mission modules. These include the demonstrator ‘Overwatch’, equipped with a launcher for eight MBDA Brimstone anti-tank guided missiles, a mortar carrier with 120mm weapon system and a ground-based air defence variant. In November 2019, the UK Ministry of Defence (MOD) awarded the Mechanised Infantry Vehicle (MIV) contract via OCCAR to Artec GmbH – a joint venture between Rheinmetall and Krauss-Maffei Wegmann (KMW), with manufacture of the Boxer vehicles subcontracted to RBSL and WFEL in the UK. Rheinmetall has invested more than 40Million Euro (£35m) in the RBSL facility at Telford, creating and sustaining more than 600 jobs. Transfer of knowledge and technology to the UK continues to deliver Boxer at the highest quality to the UK customer. Sub contracts continue to be placed with UK suppliers to maximise the contracts with the UK content on the vehicles. Delivery of Rheinmetall and RBSL’s vehicles is due from 2023.

Rheinmetall’s HX3 10×10 wheeled self-propelled howitzer: architecture, resulting in even greater operational flexibility as well as creating scope for future performance upgrades ~ The HX3 builds on the highly-prized core strengths and family concept of its HX2 predecessor, to become an even more advanced mobile platform for complex weapon and radar systems.

These include truck-based artillery systems, which are likely to play an increasingly prominent role in coming years. On show at DVD 2022 is the Rheinmetall wheeled self-propelled howitzer mounted on a high-mobility HX 10×10 chassis. It is equipped with a highly protected cab and a fully automatic, remote-controlled artillery turret. This development is led out of Bristol by the Rheinmetall team, continuing to build and create Sovereign Capability and to sustain highly skilled jobs in the UK. The HX 10×10 will serve in future as a standard platform for a variety of artillery systems and similar military hardware.

HX vehicle family ~ Rheinmetall MAN Military Vehicle’s HX vehicle family is one of the most widely used military trucks worldwide. As military-off-the-shelf products, the robust vehicles are designed for maximum mobility and reliability under the most adverse operating conditions. In addition to the Rheinmetall wheeled howitzer on a highly mobile HX 10×10 chassis, a heavy recovery vehicle will also be on display at DVD 2022 along with demonstrations of the leader follower capability and the Automatic Load Handling System.

Caracal 4×4 special forces air assault vehicle family: Together with Mercedes-Benz and ACS Armoured Car Systems, Rheinmetall offers a versatile and highly mobile 4×4 vehicle family for light forces such as airborne or special operations units. The new vehicle system will be presented for the first time in the UK at DVD 2022.

Ten Fuchs vehicles, originally produced by the Rheinmetall group, were gifted to the British Government by the German Government during Gulf War 1. RBSL secured the contract to replace the Chemical Radiological Nuclear (CRN) mission equipment, address obsolescence issues and provide in-service support. The work is being led by RBSL’s facility in Telford, with the support of the local supply chain. So far, six vehicles have successfully been converted and delivered to the customer, with the remaining four vehicles on track to be converted by the end of the year.

Loitering munitions ~ These air-supported precision munitions combine the characteristics of drones and guided missiles. They enhance the ability of even small units to reconnoitre target zones from above, coupled with standoff, high-precision engagement of targets. Rheinmetall and its partner UVision have entered a cooperation agreement to market UV’s Hero family of loitering munitions in Europe. At DVD, the two companies will be highlighting possibilities for integrating Hero LM systems into manned and unmanned vehicles.

Digitised battlefield ~ As a leading systems integrator, Rheinmetall possesses all the knowledge necessary for networking various entities on the digital battlefield of the future. At DVD 2022, Rheinmetall will show how the interplay of sensors, effectors and human-machine interfaces can lift the “fog of war”. Rheinmetall will also be showcasing the current configuration of its Gladius 2.0 soldier system and how it can be networked with manned and unmanned vehicles and subsystems.

The Challenger 3 will be a network-enabled digital MBT that combines maximum lethality with greatly improved battlefield survivability. At DVD 2022, Rheinmetall and RBSL provide information on the progress of the project, in which numerous other British companies are also involved.

In addition, Rheinmetall will be presenting its extensive expertise in virtually all capability categories at DVD 2022. These include Rheinmetall’s know-how as a systems house for the digitalisation of armed forces, its comprehensive expertise in protection technologies, weapons and ammunition systems for threat-adequate and scalable effects, or innovative and networkable sensor technology for applications on land, in the air or at sea. We look forward to seeing you at DVD 2022.