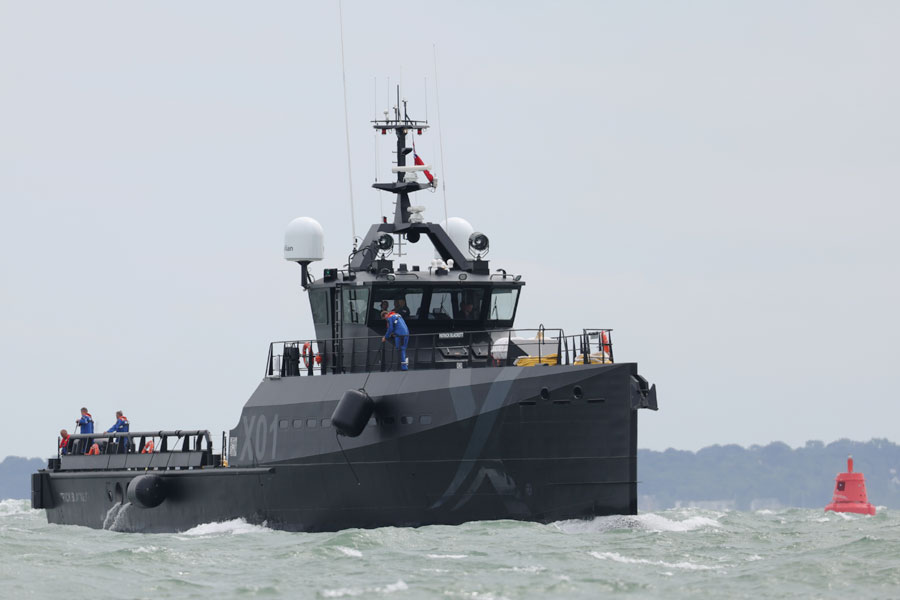 The 42m, 270-tonne vessel arrived in Portsmouth this week and is named after former Royal Navy sailor and Nobel Prize winner Patrick Blackett. It will be used by the navy’s experimentation and innovation experts NavyX who have been driving innovation across the service and testing new technology, kit and concepts, passing them quickly to the frontline. And procuring the Damen 4008 Fast Crew Supply ship has been an example of this with the boat purchased, adapted for Royal Navy use and delivered within 12 months.

Thanks to the addition of the XV – Experimental Vessel – Patrick Blackett, NavyX will be able to carry out more trials at sea to enhance the Fleet’s operations and ensure the UK stays at the leading edge of naval warfare. XV Patrick Blackett will enable NavyX to experiment without the need to place demand on other navy ships, many of which are deployed permanently away from UK waters. She will also offer the chance to work closer with industry and academia partners.

Damen Shipyards, in the Netherlands, won the contract for the test ship which can reach speeds of 20 knots and has been modified to support NavyX operations. The ship, with a crew of five Royal Navy personnel, will have a ‘plug and play’ element to support the navy’s new PODS (Persistently Operationally Deployed Systems) concept which means it can be adapted to the specific trials or experiments it’s carrying out including testing drones and autonomous vessels and AI decision-making. It will also have container secure points on the work deck so a range of payloads can be embarked, offering flexibility and a modern approach to testing. In the future, XV Patrick Blackett will take part in Royal Navy and NATO exercises, with the possibility of it being upgraded with autonomous technology.

Colonel Tom Ryall, Head of NavyX, said: “The arrival of this vessel is a pivotal moment for NavyX’s ability to deliver output for the Royal Navy.

“She will give us greater flexibility to experiment with novel military capabilities, and accelerate new technology, kit and concepts to the frontline.”

NavyX chose to name the ship XV Patrick Blackett to honour the British physicist who won a Nobel Prize for Physics in 1948. He served in the Royal Navy in the First World War and made a major contribution in the Second World War advising on military strategy and developing operational research – being named the Admiralty’s first director of Operational Research.