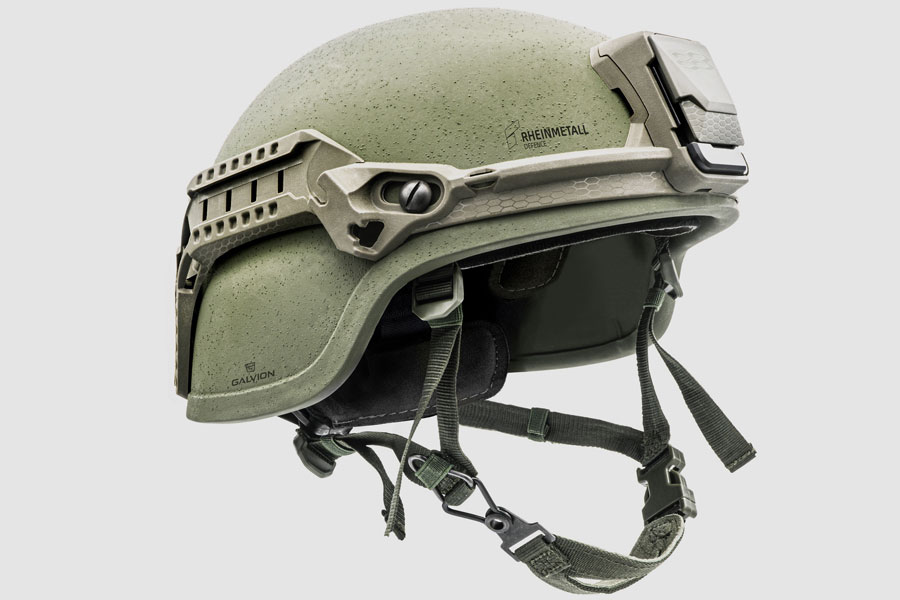 Galvion Press Release, 11 December 2020: [embargoed until 09:00Z] Galvion, a world leader in innovative head protection systems and power management solutions, is pleased to announce that a customised Batlskin Viper helmet solution has been chosen as the next Specialised Forces Helmet (Helm SpezKr schwer); Specialised Forces are Ranger-type units of the German Army. The programme was awarded to Rheinmetall Soldier Electronics GmbH, who will act as the in-country contracting entity for the Galvion helmet, following a full and open competition. The contract encompasses the delivery of up to 20,000 helmets, with an initial order for 5000 helmet systems and helmet refurbishment plan to be executed in-country by Rheinmetall Soldier Electronics, as well as the option for a 2-year contract extension following contract framework completion in 2025.

The bespoke helmet system, developed to the German MoD’s rigorous performance and technical standards, underwent thorough testing and an extensive user evaluation prior to being selected. The Viper helmet solution will come in a custom German Green colour, and features Galvion’s Modular Suspension System which has been configured to meet a variety of impact standards and mission requirements. The helmet is lighter, offers better protection and improved integration with Communication Devices and NVGs than the current fielded helmet, and end-user feedback rated the helmet comfortable and high-performing. Rheinmetall Soldier Electronics will begin delivering the Galvion helmet to the German Specialised Forces in Q2 2021.

“After years of development, we are honoured to have our Viper helmet system chosen by the German Specialised Forces,” commented Alex Hooper, Galvion’s V.P. of Global Business Development. “Our experienced team of engineers and designers worked with the MoD to build a user-centric system that balances protection, integration, durability and optimised fit. Germany’s exacting technical requirements and broad testing process ensures that their soldiers will be outfitted with a high-performing system that has been tailored to meet their unique mission needs. Having RSE acting as our contracting entity ensures that the German Bundeswehr will have a premium product with reliable in-country support throughout the life of the program.” Hooper added: “Galvion has developed a reputation as the leader in NATO next-generation helmet systems, and the awarding of this contract speaks of our commitment to provide bespoke solutions for the modern soldier.”

As well as this latest award, Galvion enjoys an impressive track record of large-scale global sales for protective head systems and soldier power management systems. Other key customers include defence forces from the US, Canada, UK, the Netherlands, Denmark, Norway, Israel, Australia, New Zealand, in addition to many NATO SF unit around the world.

Rheinmetall, Press Release, Düsseldorf, 12 December 2020: Rheinmetall and its strategic partner, the North-American helmet maker Galvion, have won an order to supply the German Bundeswehr with an advanced combat helmet.

Awarded in November 2020, the framework contract encompasses the delivery of up to 20,000 helmets, specifically the ‘Combat Helmet, Special Forces, Heavy’. A first call-off of 5,000 helmets came in November 2020. Delivery is being handled by Rheinmetall Soldier Electronics in Stockach, Germany, the Group’s specialist for laser-light modules, a company with strong connections in the soldier systems sector.

The framework contract runs until 2025, with the option of a two-year extension. The total potential value of the order is in the lower two-digit million Euro range.

The new combat helmets offer improved protection and are more comfortable to wear – especially the level-dependent hearing protection and night vision devices. They therefore significantly boost the combat effectiveness of troops deployed in infantry-type operations. Among other things, the helmets are intended for special operations forces and Ranger-type forces. Their use in the NATO spearhead VJTF 2023 is also being considered.

In terms of strategy, this framework contract positions Rheinmetall to compete for other potential major orders in the field of tactical head protection.