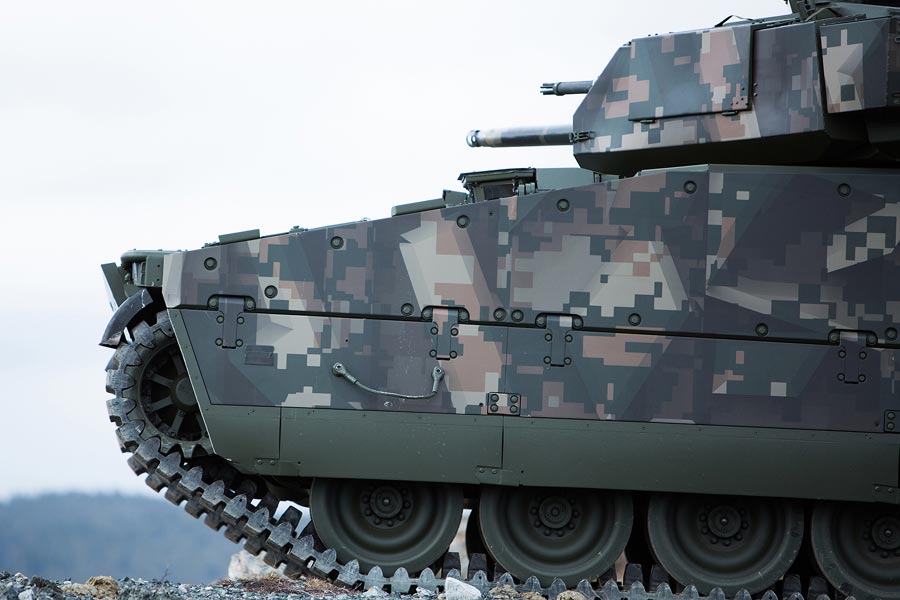 CV9035NL ~ The Royal Netherlands Army is investing in the future battlefield by implementing a rubber track system.

Press Release, Örnsköldsvik, 29 October 2020: As one of seven European users of the CV90, the Royal Netherlands Army operates 144 CV90s. Being a part of the CV90 family means that the user is working closely and continuously with BAE Systems to improve the vehicle’s current capabilities and looking at investments that will ensure the Dutch Army’s CV90s stay relevant for future challenges.

As part of a more than 500 million Euro upgrade programme, the most recent step forward is the implementation of a rubber track system on the Dutch CV9035 Infantry Fighting Vehicle. What may seem like a small change from steel tracks to rubber has an enormous benefit – the change will improve crew endurance and running costs and significantly reduce weight, which in turn allows for better performance. Altogether, the change to rubber tracks increases the potential for further upgrades.

The new contract, signed earlier this month, includes development, testing and verification, as well as the delivery of implementation kits for training alongside the Dutch customer – this will secure Dutch defence security of supply for many years to come.

Staying on track: The modification of the CV9035NL vehicles from steel tracks to a rubber track system has many benefits, including cutting the noise level inside the vehicle by a massive 10 dB and vibration levels by 65 percent.

“The reduced vibration levels will increase the life expectancy of electronics, optronics, and ammunition, which will significantly reduce vehicle running costs,” explains Dan Lindell, Director Combat Vehicles at BAE Systems Hägglunds. “What’s more, with the reduction of close to 1 tonne in vehicle weight as a result of the change to a rubber track system, there will be increased potential for continuous growth.”

There are significant benefits for the Dutch CV90 crew too. The change to a rubber track system will help to reduce crew fatigue thanks to reduced noise levels inside the vehicle. The adjustment also improves the CV90’s stealth on the battlefield and increases its mobility in the most challenging conditions.

Continuous development: This modification is the latest in series of incremental upgrades to the Dutch CV90s. Most recently, in 2019, the Dutch Army selected BAE Systems to integrate the Elbit Systems’ Iron Fist Active Protection System (APS) into its fleet. Iron Fist is an advanced technology that automatically detects, tracks and neutralizes incoming threats to protect the vehicle and its crew.

“This development is a real strategic milestone in the CV90’s approach to holistic survivability,” added Lindell. “It complements the already existing stealth- and soft-kill layers with further means to defeat the incoming threat, making survivability even more achievable.”

In the club: While focused on the next phase of their Mid-Life Upgrade programme, the Netherlands still finds time to join six other European nations as part of the CV90 User Club.

These annual meetings – normally held in Örnsköldsvik, Sweden, where BAE Systems manufactures the CV90 – are a forum for each nation to share combat experiences, concerns about emerging threats and requirements, or ideas for new innovations and technologies.

As a member of the club there is always something more to learn as the group works closely together with the CV90 team to continuously evolve the vehicle’s capabilities as a modern, advanced, and affordable combat vehicle.