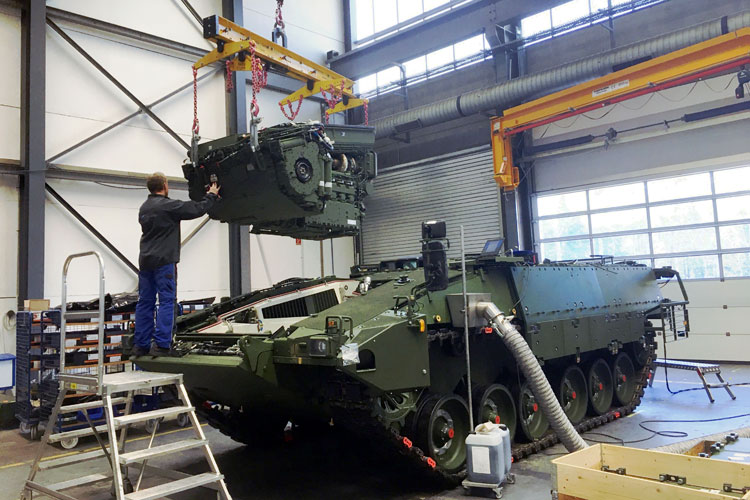 Rheinmetall has been awarded an order package worth €54 million to supply additional materiel, spare parts and tools for the Puma Infantry Fighting Vehicle.

Press Release, Düsseldorf, 08 January 2020: Rheinmetall has been awarded orders for additional equipment for the Bundeswehr’s Puma infantry fighting vehicle. The Düsseldorf-based technology group is to supply spare parts and special tools worth a total of around €54 million, including value added tax.

Rheinmetall has thus positioned itself as a long-term service partner of the Bundeswehr for the Puma, a vehicle that will feature in the German Army inventory for many years to come. Of the total order amount, €10 million was already booked in 2019, with the remaining €44 million to be booked during the period 2020 to 2022.

Germany’s Federal Office for Bundeswehr Equipment, Information Technology and In-service Support (BAAINBw) has contracted with the German defence industry, represented by a project management company, to supply an extensive array of equipment. As a member of the consortium responsible for developing and producing the Puma, Rheinmetall’s share of the order comes to approximately €54 million.

Under a recently signed framework agreement, shipment of the spare parts, worth around €44 million, is scheduled to begin in mid 2020. Shipments will be in response to call-offs, with the delivery period expected to cover a roughly two-year period. Delivery of the special tools, which form part of a separate order worth around €10 million, will also take place during the 2020-2022 timeframe. They will be shipped to Heeres instandsetzungs logistik GmbH (HIL) and relevant Bundeswehr Technical Centres. Furthermore, additional materiel requirements can be expected in future.

Delivery of the last of the 350 Puma IFVs ordered by the Germany Army will take place during the course of 2020. With these vehicles now entering service, the current order for spare parts will assure optimum logistical support and operational readiness. The mainstay of the Bundeswehr’s ‘System Panzergrenadier’ mechanized infantry capability, the Puma infantry fighting vehicle will play a vital role in the array of modernized equipment earmarked for the Very High Joint Readiness Task Force 2023 (VJTF 2023), the NATO spearhead force which the Bundeswehr will be furnishing. In summer 2019 contracts were awarded to a working group for the ‘System Panzergrenadier VJTF 2023‘ project, with orders worth over €470 million (including value added tax) going to Rheinmetall.

The top-performing Puma infantry fighting vehicle is the most advanced system of its kind anywhere. It sets new standards with regard to command and control, lethality, mobility and situational awareness. Featuring modular, highly effective force protection elements and unique combat effectiveness, the Puma is tailormade for network-enabled operations.