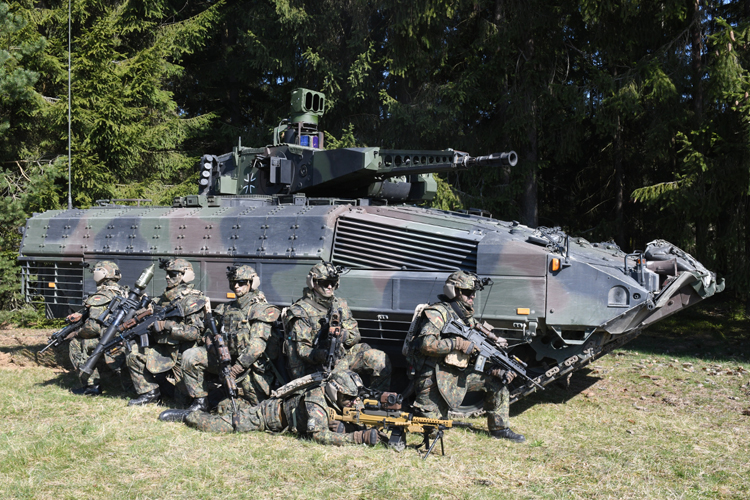 Rheinmetall has announced it is modernising Puma Infantry Fighting Vehicles and other equipment for the NATO spearhead NATO VJTF 2023 Readiness role.

Press Release, 22 July 2019: Rheinmetall is taking on a key role in equipping the NATO spearhead Very High Joint Readiness Task Force 2023 (VJTF 2023), which will be furnished by the German Bundeswehr. Contracts have now been awarded to a consortium for the ‘System Panzergrenadier VJTF 2023’ project, in which Rheinmetall’s share comes to over €470 million, including Value Added Tax. Work has already begun and is set to continue through to the end of the VJTF readiness phase in 2024.

Included in the ‘System Panzergrenadier VJTF 2023’ package is a comprehensive combat performance upgrade of forty-one Puma Infantry Fighting Vehicles, coupled with additional measures for improving communication between the Infantry Fighting Vehicles and dismounted infantrymen. For Rheinmetall, the total value of this order comes to €258.3 million, including value added tax. The systems will be delivered at the end of 2020/beginning of 2021.

Among other things, the package also encompasses complete logistic support of the VJTF Pumas for a period of five years, i.e. spare parts, special tools and spare parts logistics. Also included is a new generation of digital radios for the Infantry Fighting Vehicles as well as integration of the MELLS multirole light guided missile system, significantly expanding the capabilities spectrum of Puma. New daylight and thermal imaging cameras and a colour display feature in the upgrade too. Optimised day and night vision will increase the range of reconnaissance, while simultaneously widening the crew’s field of view. Furthermore, new training resources will enable the unit to train in a highly realistic manner.

Closely linked to the hardware of the new optronic systems and monitors for the Infantry Fighting Vehicles is the contract for development of the ‘Vision Enhancement, Chassis’, which is already underway. Including Value Added Tax, it represents sales of €67.2 million.

Furthermore, Rheinmetall is equipping the mechanised infantry companies of the VJTF 2023 with ‘TacNet’, its battle management system (BMS). In addition, an initial lot of ten platoon versions of the ‘Future Soldier – Expanded System’ soldier system will be brought up to modern VJTF 2023 standard. Improved communication between the Puma crew and the dismounted infantry section will result in a continuously updated, uniform common operational picture. This way, Rheinmetall gives mechanised infantry a command-and-control capability that extends from the company commander to the individual rifleman on the ground. These modernisation moves will mean incoming orders for Rheinmetall worth €146.5 million, including value added tax.

‘System Panzergrenadier VJTF 2023’ substantially enhances the fighting strength of the VJTF 2023. At the same time, Rheinmetall views these measures as a template for further modernisation and digitisation of the Bundeswehr. Modernising the command and control capabilities of complete mechanised infantry companies and bringing the IdZ-ES up to VJTF 2023 standard involves modifying the hardware and software. Dispensing with the ‘electronic backbone’ is one key innovation. Others include advanced new radio systems for dismounted troops and Infantry Fighting Vehicles, which result in improved command capabilities as well as enabling secure transmission of large amounts of data.

During development of the new vision systems and their integration into the Puma, an initial lot of five sets of prototype assemblies will be fabricated and integrated into five standard vehicles. These tasks are to be complete by 2021. Verification will then take place at the Bundeswehr’s technical centres by 2023.

Furthermore, digitisation of the vision technology will proceed in tandem with implementation of NATO Generic Vehicle Architecture (NGVA) in the Puma. It forms the foundation for the future sensor-to-shooter nexus. Already underway, the networking of sensors and effectors in individual vehicles will soon enable the networking of sensors and effectors in entire units and formations. As a result, the Puma will be one of the world’s first digitised combat vehicles.