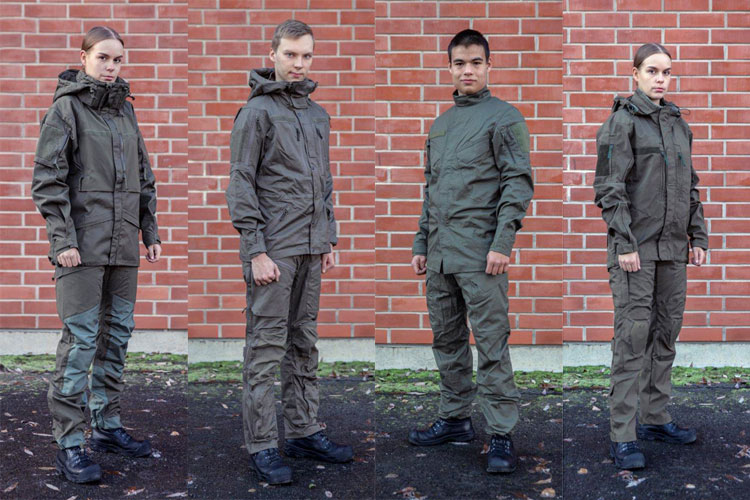 Almost 500 soldiers from Denmark, Finland, Norway and Sweden are being issued with sample Nordic Combat Uniform clothing for five months of field testing.

NORDEFCO News Release, 12 November 2019: The Nordic Combat Uniform (NCU) project is now ready to enter the field-testing phase. Some 480 soldiers from all four Nordic countries will be testing the uniform systems from the final prequalified tenderers.

In these weeks some 480 soldiers, who are going to take a part in the field-testing phase, will be opening the boxes with the sample uniform systems from the tenderers. That will be the beginning of the comprehensive test period running from December 2019 to May 2020.

The Nordic Combat Uniform Project is a part of Nordic Defence Cooperation (NORDEFCO). The purpose of the joint Finnish, Swedish, Norwegian and Danish Nordic Combat Uniform project (NCU) is to acquire a common flexible combat uniform system that meets the operational requirements of the modern battlefield.

One system, one design, but national camouflage:

The NCU clothing system includes uniform configurations from an underwear layer to outer garments, used in European, jungle and desert conditions. The configuration is the same in all countries, but each country will use its own national camouflage pattern in the uniforms. Headgear, gloves, footwear or personal protective equipment are not part of the NCU, and each country will procure those independently. The technical requirements for this purchase are a system approach which meets the operational requirements. This includes Nordic and European combat environment, but also in very cold environment and in extreme warm conditions like in jungle or desert. These functional requirements are based on joint user experience from all four countries and Nordic expertise.

One of the big advantages of a common Nordic Combat Uniform project is the scale of the acquisition. With a contract value of estimated 425 million Euros it has attracted worldwide attention from leading suppliers which creates ground for an increased competition and a more favourable price-quality-ratio.

Experiences from four nations packed into one combat uniform system:

Although price is important the greatest advantage of the joint Nordic cooperation is the comprehensive test conducted by around 480 soldiers from the four countries. Test subjects include all types of soldiers from conscripts to Special Forces.

In the bids, the combat uniform tenderers described the uniform configurations that, in their mind, correspond to the functional requirements set by the NCU countries. Based on the bids the project has invited combat uniform tenderers to field tests organized from December 2019 to May 2020. The field tests will evaluate the functionality of the offered uniform configurations in different conditions and collect user feedback about the uniforms’ suitability for use.

The field tests for the European area uniform configurations will be conducted in Finland, Sweden, Norway and Denmark by the countries’ armed forces. The field tests for the jungle and desert uniforms will be conducted by the Danish Armed Forces including Special Forces in the first part of 2020. In Finland the clothing configurations will be subjected to separate tests used to assess their functionality in Arctic conditions, among other things.

After the field tests are concluded the Swedish Defence Research Agency (Totalförsvarets forskningsinstitut, FOI) will collect the feedback given by the Nordic user groups. The NCU project will analyse the feedback, and on this basis make a functional performance assessment on the combat uniform candidates. The assessment of the functional performance forms part of the evaluation of the technical performance of each offered combat uniform system. The overall evaluation includes both the technical performance and the offered prices. This evaluation will form the basis for negotiations with the remaining tenderers and a request for best and final offers which will be finally evaluated resulting in the award of the NCU Framework Agreement.